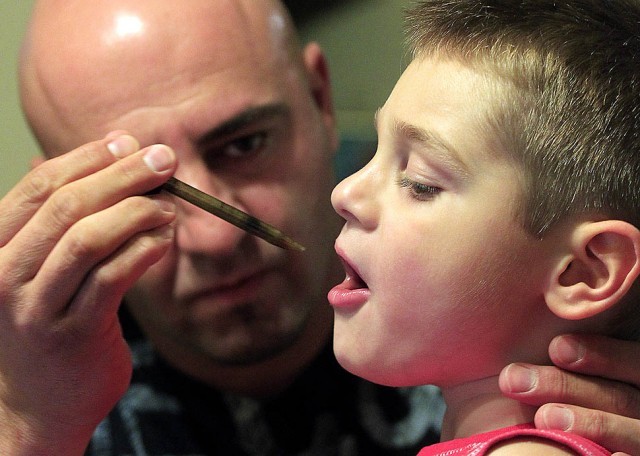 In this post from Reset.Me, Mitchell Colbert speaks with Jason David, a CBD expert and star of the Discovery Channel show ‘Weed Wars’, about how cannabis medicine saved his 6-year old son’s life.

The following story first appeared in The Leaf Online:

Jason David is a CBD expert (CBD is the non-psychoactive compound in marijuana that has shown to have significant health benefits), and star of the Discovery Channel show Weed Wars. He uses cannabis to treat his young son Jayden’s rare seizure disorder, Dravet Syndrome.

When it aired, Weed Wars profiled the medical marijuana dispensary Harborside Health Center in Oakland, California. Harborside and the cannabis testing clinic Steephill Labs, along with Fred Gardner of Project CBD, were instrumental in the rediscovery of CBD back in 2009/2010. Thanks to their testing and tracking down of CBD-rich mother plants, we now have Jamaican Lion, Harlequin, ACDC, and numerous other CBD-rich strains available across the country. Jason came to Harborside right after they completed their project to breed CBD back into cannabis and was able to reap the benefits for his son Jayden.  He learned more about cannabis medicine via the family of Charlotte Figi, the little girl who CNN’s Sanjay Gupta famously followed as she successfully used the cannabis medicine to treat her seizures. The high CBD strain “Charlotte’s Web” is named after Figi.

Here’s what David had to say about his son and cannabis medicine:

How is Jayden currently doing and what medicines is he currently taking?

He’s my life. He is doing well thanks to being on the right medicine. Currently he is taking the Jayden’s Juice MCT oil that Harborside sells, the stuff that is rich in CBD and CBG. He is also using THCa rich medicine. [Writers Note: Jayden’s Juice contains a whopping 12.5mg of CBG and over 16mg of CBD per milliliter and four active terpenoids.] He doesn’t need THC anymore but THC was crucial during the weaning process, without it Jayden would have died. The withdrawals from benzodiazepines is like a heroin withdrawal and the only thing that would get rid of the withdrawal symptoms was THC. One thing that needs to change is that, currently, I can get pharmaceuticals for my child from a pharmacy on any street corner, but they will only make his seizures worse. I have to drive over two hours to get the medicine he needs to actually get better, for some parents it is even further. It’s our God-given right to use this plant, there is no reason it should be this difficult.

You mention that Jayden would not have survived the weaning process off of pharmaceuticals and onto natural cannabis medicine without THC, was there an ideal ratio or product you used?

Definitely, there is no way to wean with just CBD, I tried it and it just made the withdrawal symptoms worse. [Writers Note: Cannabidiol inhibits CYP450 and related liver enzymes, which are needed process drugs as normal, without them toxicity builds up in the liver.] THC actually relaxes the stress on the brain from the benzodiazepine withdrawals Jayden was going through. The best product I found was the full extract cannabis oil that Harborside sells, the 1-1 ratio of CBD to THC. The CBD makes the psychoactive effects of the THC more mild. We experimented with different ratios. There is no one size fits all because we are all different, thankfully we found what worked for Jayden early on. It’s all trial and error until you find the right ratio of cannabinoids; that is what I find great about Harborside, they have so many options to choose from you’re bound to find something helpful.

Most parents who begin using CBD-rich cannabis to treat seizures find out about it through someone else, these days, more often than not that person is you. How did you first find out about CBD as a medicine? Do you feel that CBD alone is enough?

Jayden was dying, I didn’t even know if he had a week left. I felt suicidal because the pharmaceuticals were making him crazy. I could tell that the pills were making him worse but I didn’t know what to do. I heard on the news about a kid who got kicked out of highschool for smoking cannabis and I began doing some research on it. I found that the federal government had a patent on the use of cannabidiol for epilepsy, now I knew I had found something. At this point I went into Harborside to get my first CBD-rich cannabis for Jayden, you can watch Weed Wars to see more about that. This was 2011, CBD was a totally new thing and no one was testing for ratios yet. Even without knowing the exact ratio, the cannabis I got for Jayden worked and he had his first day seizure free. It was amazing.

The first batch I got lasted four months and worked great. The next batch didn’t work nearly as well. That was when we started paying attention to the CBD/THC ratio, this was when I got in touch with Dr. William Courtney. I found out that the first batch I was using had a 6-1 CBD/THC ratio, the second batch only had a 3-1 ratio which didn’t seem to be enough to help Jayden. It was nine months after I started treating Jayden with CBD that Paige, Charlotte Figi’s mother, got in touch with me asking for help with Charlotte.

So Charlotte’s parents first heard about CBD-rich medicine through you?

They contacted me and asked for help, specifically her mom Paige. Charlotte had been having three months of constant seizures and they were desperate for help but neither one of them had a cannabis recommendation. I got in touch with a dispensary in Colorado, but without a recommendation they would not help the Figi’s. That dispensary did give me the phone number for someone who vended medicine to them. That vender didn’t have any CBD-rich medicine but did have some THC-rich lollypops. I told Angel to get them one as soon as possible. Paige contacted me later and told me that, while not perfect, that THC-rich lollypop gave Charlotte her first day seizure free in weeks.

Have you ever tried Charlotte’s Web for Jayden? How well did it work for him?

I did very briefly and Charlotte’s Web made his seizures the worse they ever were, over fifteen seizures a day. I’ve talked to lots of parents, I have people contacting me every day from all over, and many others have had the same experience with their children. While it may work for some kids, Charlotte’s Web doesn’t work for everyone and it didn’t work for Jayden. Some of these parents have told me they’re giving up on cannabis and going back to pharmaceuticals, others who made the move for Charlotte’s Web are moving back home, disheartened because that one strain didn’t work. There are a lot of other CBD-rich options out there, I know because I have been using them for years. I also know that a lot of these parents, just like me and Jayden, have been using THC and THCa-rich medicine as well as CBD, they just aren’t talking about it. You need different cannabinoids for different things and at different phases in the weaning and healing process.

What are your thoughts about the proposed Charlotte’s Web Act of 2014, the federal CBD and “therapeutic hemp” legalization bill?

Cannabis legalization has never been about just one component, one strain, or one method. There are thousands of methods, over a hundred cannabinoids, and countless strains. This bill isn’t even going to help 1% of patients out there. A lot of people just believe what they see and hear on TV rather than doing their own research. Unfortunately, what people see on TV isn’t telling the whole truth about cannabis. This bill is like if you have over a hundred different pharmaceuticals you can use for epilepsy but you’re being told you can only use one and if it doesn’t work then you’re screwed. Why should we limit it to just one cannabinoid or just one strain? It isn’t just children with seizures, we have tons of veterans coming back home with Post Traumatic Stress who are using THC-rich cannabis to get off their pills. Cancer and HIV/AIDs patients both need THC-rich medicine for relief of nausea. Just like CBD, THC also controls the growth and spread of tumors. THC has been shown to help glaucoma, fibromyalgia, depression, wasting syndrome, and countless other conditions.

People talk about getting ‘high’ on pot, what are your thoughts on this and what terminology do you prefer?

Using the word high, talking about getting high on pot, is a scare tactic that is used to keep cannabis illegal and obscure the truth about THC. Parents call me all the time asking about weaning their children onto cannabis but they’re afraid of THC because it will make their child high. I tell them that their children are already high on the pharmaceuticals, they would be less high and much better off using cannabis, even THC-rich cannabis. Most people say they get medicated on pharmaceuticals, but really they are getting high, in reality cannabis is what gets you medicated. Most people have it backwards. I prefer to talk about using natural medicine.