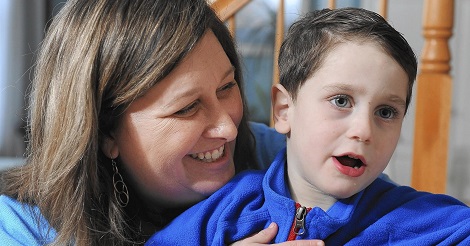 In this post from 420 Magazine, Jacob Redmond reports on a new video that makes the case for allowing parents to use cannabis oil to treat seizures in their epileptic children.

A new video from NowThis makes the case for allowing parents to use cannabis oil to treat seizures in their children.

“My goal is to hear his voice . . . to hear him talk,” says Megan, mother to a son with severe epilepsy, in the video. “We just want him to be happy.”

The video seeks to dispel the notion that parents who give cannabis to their children are trying to get them high. In reality, they are trying to help them live normal lives by using what is sometimes the only effective treatment for debilitating, uncontrolled seizures.

The oil is made from cannabidiol, or CBD, a non-psychoactive concentrate derived from marijuana. It is created using special strains of cannabis specifically grown to contain only trace amounts of tetrahydrocannabinol, or THC, the chemical that causes the stoned effects commonly associated with the plant.

In the video, Dr. Linda Laux, a researcher at Lurie Children’s Hospital in Chicago, recounts seeing children become more verbal and gaining coordination while taking CBD oil. And a study published in this month’s Epilepsy & Behavior showed that CBD treatment improved seizures in 57 percent of children to which it was administered, corroborating anecdotal reports and other studies that have shown similar results.

Twenty-three states plus Washington, D.C. have legalized medical marijuana, and an additional 13 have allowed the use of CBD treatments in limited circumstances. Even where it’s legal, however, families sometimes have to overcome numerous bureaucratic obstacles to obtain the medicine for their children – not to mention the fact that it remains illegal under federal law.

If parents treat their children with CBD in states where it is illegal, they risk serving jail time or having their kids taken away from them, such as in the case of a Minnesota woman who narrowly avoided prosecution for using cannabis to ameliorate her son’s seizures.

There are several bills in front of Congress that would make it easier for children with epilepsy to have access to lifesaving CBD treatments. The Charlotte’s Web Medical Access Act would remove low-THC strains of cannabis from the definition of marijuana, effectively ending the federal ban on them. The Compassionate Access, Research Expansions and Respect States (CARERS) Act would move marijuana out of the most restrictive federal category altogether.

For families with suffering children, relief can come none too soon.

“I want him to thrive, and live, and enjoy us,” says Brienna, another mother whose child is stricken with epilepsy. “If a plant can do that, why do we object?”