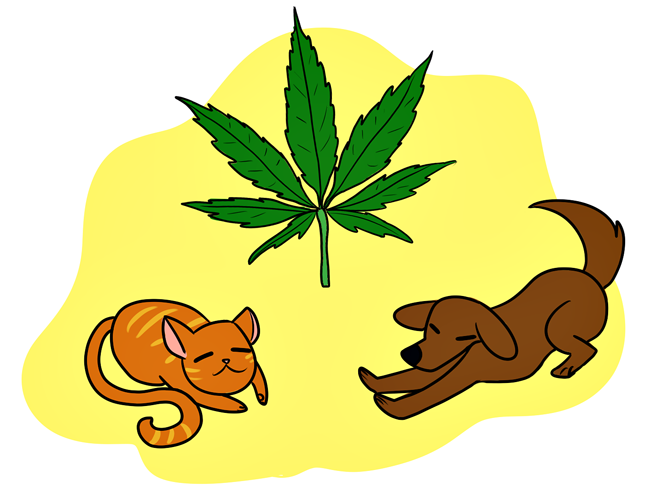 CBD products claiming to improve your pet’s health are on offer. In this post from The Daily Texan, Jackie Wang highlights the CBD supplements that are being sold for animals:

As the Texas Legislature continues to debate legalizing medical marijuana for humans, people do have the option of purchasing related products for members of their households — specifically, their pets.

Websites such as Canna-Pet and Canna Companion sell cannabinoid (CBD) products for pets, claiming they benefit animal health. These products do not have enough THC, a compound attributed to the “high” users get from cannabis, to have a psychoactive effect, said Sarah Brandon, Canna Companion founder and veterinarian.

“The [CBD to THC] ratio of six to one in the human world tends to be the golden ratio,” Brandon said. “When we went above five to one, dogs and cats had more side effects, and we weren’t seeing a corresponding effect in benefits.”

Stephanie Hamborsky, a Plan II and biology sophomore and president of the UT chapter of Students for Sensible Drug Policy, said the idea of CBD products for animals makes sense.

“In all mammals, we have cannabinoid receptors,” Hamborsky said. “It would make sense that dogs are prescribed marijuana because they probably respond to it similarly [to humans].”

SSDP, a national organization, works toward more sensible policies on drug use and abuse in the U.S., Hamborsky said. She added that experts should be able to make the call on whether to prescribe CBD or medical marijuana products.

“If professionals have analyzed the data and believe it can be helpful, they should have the ability to [prescribe it],” Hamborsky said.

CBD products are considered unapproved drugs by the Food and Drug Administration, which issued warning letters in February to several companies that advertised CBD products, including Canna-Pet and Canna Companion.

“It is important to note that these products are not approved by FDA for the diagnosis, cure, mitigation, treatment or prevention of any disease, and, often, they do not even contain the ingredients found on the label,” the FDA said in a report released March 3.

Brandon said she never intended for Canna Companions to become an FDA approved drug and immediately made changes to comply with wording restrictions.

“It’s just a supplement,” Brandon said. “We saw a product that had the potential to help a lot of animals without causing a lot of side effects … and wanted people to discuss the medical benefits of trying these compounds as well as the negatives.”

Morgan Ehmling, a Plan II and biology freshman, has a Boxer dog with hip problems. Her dog has been on steroid injections, and her veterinarian is contemplating using laser therapy to relieve the dog’s pain further, Ehmling said.

“Taking a natural cannabinoid supplement would be better than shooting my dog with some lasers,” Ehmling said.

Ehmling said she would approach this option cautiously.

“I feel like if I knew someone close enough to me who [used CBD for a pet], I’d go for it full force, but I’d do a ton of research first,” Ehmling said.

Hamborsky said she would also consider giving her cat CBD products as long as there are sufficient studies about the compound’s safety.

“My only concern is the psychoactive potential of THC, but there are other marijuana derived substances like CBD — cannabidiol — that deal with pain relief,” Hamborsky said. “But I would definitely consider that for my cat.”

via Cannabidiol supplements aim to give higher quality of life to pets | The Daily Texan.