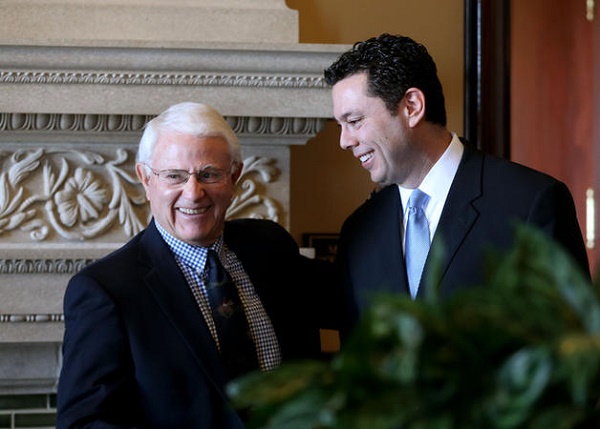 Rep. Jason Chaffetz told Utah lawmakers he is about to introduce a bill to legalize CBD in states where it’s approved for patient use. This post from Deseret News discusses Rep. Chaffetz’ views on cannabidiol in a medical marijuana debate in Utah.

Rep. Jason Chaffetz, R-Utah, joined Friday’s debate over medical marijuana in the Utah Legislature, telling lawmakers he is about to introduce a bill in Congress to legalize cannabidiol in states where it’s approved for patient use.

In response to questions from lawmakers during his annual report to the Legislature, Chaffetz said he has no interest in seeing the legalization of medical marijuana that could end up being used recreationally.

But Chaffetz said he wants to remove federal prohibitions on the medical use of cannabidiol, a marijuana extract believed to fight seizures that is low in THC, the hallucinogenic chemical responsible for the “high” associated with marijuana.

He said his bill would apply only in states that allow the use of cannabidiol, also referred to as CBD. Currently, Chaffetz said, 15 states — including Utah — permit various uses of the product.

Utahns with epilepsy have trial access to hemp oil containing CBD under a 2014 law. The Utah Senate started debating separate medical marijuana bills Friday, SB89, which would expand access to CBD; andSB73 which would also allow access to THC.

Chaffetz said he was not familiar with those bills and started working on his proposal about six months ago to help those Utahns already using hemp oil under the 2014 state law.

“I want there to be a legally transparent way they can get it” without fear of being in violation of federal law, the congressman said. Marijuana use is illegal under federal law, classified as a Schedule 1 substance, as is heroin.

He told members of the Utah House he appreciates what they did with the 2014 legislation but had concerns about medical marijuana being used recreationally if more of the plant were legalized in the state.

“I have no interest in wholly making marijuana available that will eventually be used, or partially used, for recreational purposes,” Chaffetz said. “We’re trying to give some relief to people who legitimately need this CBD oil.”

Going further, he said, is “the wrong direction.”

Chaffetz said after talking to experts at the University of Utah, he does not see a need to reclassify marijuana to advance medical research after being assured the institution has the access it needs to CBD oil.

A resolution sponsored by Sen. Brian Shiozawa, R-Cottonwood Heights, SCR11, calls for the federal government to downgrade marijuana to a Schedule 2 substance to make it easier to acquire for research.

But Chaffetz said there may be unintended consequences to such a change.

House Minority Whip Rebecca Chavez-Houck, D-Salt Lake City, received a similar answer when she asked Chaffetz whether he would co-sponsor legislation in Congress to change marijuana to a Schedule 2 drug.

Chavez-Houck said part of the challenge Utah lawmakers face are federal restrictions on their ability “to expand our opportunities to maybe provide some common-sense medical marijuana legislation here in the state.”

Chaffetz said he did not anticipate signing on to that legislation.

House Speaker Greg Hughes, R-Draper, welcomed the bill Chaffetz is drafting, saying the federal government needs to step into the debate over legalizing marijuana because of the conflict between state and federal laws.

“I think that hearing from Congressman Chaffetz that he’s going into this and trying to create clarity, it’s something you need from your federal government,” Hughes said.

Chaffetz said he expected to introduce the bill in Congress in the coming weeks. He said it will be consistent with the concerns raised by The Church of Jesus Christ of Latter-day Saints about medical marijuana.

The LDS Church has announced opposition to SB73 but has raised no objection to SB89, with church spokesman Eric Hawkins stating the competing bills “take very different approaches when it comes to issues like access, distribution, control and the potential harm of the hallucinogenic compound THC.”

Hawkins also said in a statement last week that in addition to those questions, “there are several other important issues to be resolved. At the forefront is that the use of medical marijuana is still illegal under federal law.”

He said the church agrees “with groups such as the American Medical Association, who have said that further study is warranted before significant public policy decisions on marijuana are advanced. For these reasons, the church urges a cautious approach.”

Chaffetz’s remarks to lawmakers focused on his work as chairman of the House Oversight and Government Reform Committee, including a call to impeach Internal Revenue Service Commissioner John Koskinen.

He also had harsh words for the Environmental Protection Agency, calling it “one of worst run agencies on the face of the planet. They are not doing their job. It’s an embarrassment,” citing its lack of action on water contamination in Flint, Michigan.

And Chaffetz urged members of the Utah House to consider rejecting federal education funds to help eliminate the need for the U.S. Department of Education, an agency he said he’d like to abolish.

“Look at the cost of taking those federal funds,” the congressman said. “I know the first inclination, the gut reaction, is to take all the money we can get. But let’s also understand the cost of that money.”