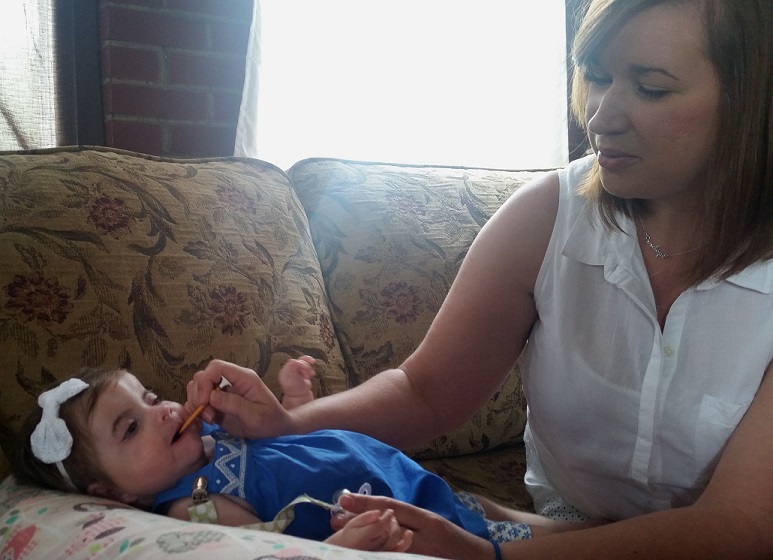 In this post from Kingsport Times News, Nick Shepherd reports that a Greeneville mother sees remarkable improvement in her infant daughter after using CBD oil.

Inside her Greeneville home, Ellen McCall sits on the couch with her daughter Penelope. She stands up and walks into the kitchen to get Penelope’s medicine.

Penelope suffers from Infantile spasms, which are a specific type of seizure occurring within the first year of life. They are seen in an epilepsy syndrome of infancy, according to the National Institute of Neurological Disorders and Stroke.

Ellen walks back into the living room holding a red bottle and a syringe.

“Are you ready for your medicine?” she asks Penelope.

The medicine Penelope is about to get was illegal to have in the state of Tennessee just a few weeks ago. It is Cannabis Oil, a derivative of marijuana that contains less than 1 percent of tetrahydrocannabinol, or THC, the ingredient that gets users high.

In May, Governor Bill Haslam signed into law a measure allowing people who suffer from epilepsy or seizures to use cannabis oil, as long as they have a recommendation from a physician.

The law, introduced by Jeremy Faison, R-Cosby in the Tennessee House of Representatives, redefined marijuana by removing the requirement that cannabis oil containing cannabidiol and less than nine-tenths of 1 percent of THC be transferred, dispensed, possessed or administered as part of a clinical research study to be in legal possession.

Cannabis Oil cannot be sold in the state as the plant it comes from is still illegal. But families or patients who wish to use it and get a recommendation from a doctor can have shipped from another state where marijuana is legal, whether medicinally or recreationally.

RELATED: CBD Oil Legalized In Tennessee, But Can You Get It?

Ellen ordered Penelope’s medicine from Colorado. The cannabis oil is in a red medicine bottle, similar to cough syrup. It has a slight odor of marijuana and the label on the bottle says, “Charlotte’s Web.”

Charlotte’s Web was developed by six brothers in Colorado for a young girl suffering from seizures. The brothers crossbred marijuana to produce a strain that was low in THC and high in CBD.

Out of that effort came the Realm of Caring Foundation, a non-profit organization that provides cannabis to adults and children suffering from a host of diseases, including epilepsy, cancer, multiple sclerosis and Parkinson’s.

Ellen had already registered with Realm of Caring before the CBD oil bill became law.

“You have to give all your information about the diagnosis and general health to them,” she said. “Then they tell you how much to give her and when.”

She said the oil would normally cost more than $900, but where she signed up for the Realm of Caring, the oil cost about $250. Insurance did not cover any of the costs.

While that may seem expensive, some of the shots and medicine Penelope was taking cost in the thousands but was covered mostly by insurance.

The plan right now is for Penelope to receive two doses of the CBD oil a day, along with her other medicines. Though Ellen and her husband Andy are going to ask their doctor about weaning Penelope off some of the other drugs she is currently on to control her seizures over the next few months and increase the dosage of CBD oil to three times a day.

Ellen said she has already seen improvement from Penelope. She said Penelope is starting to use her arms and legs more. She is starting to become move vocal and is responding to noises and the voices of her parents by looking in the direction of the noise.

While these things may seem small, they are a remarkable improvement over where she was a few short months ago. Ellen credits CBD oil.

“I am extremely grateful to now have the opportunity to try a safer medication and to watch her finally grow developmentally and soon see Penelope’s personality to come,” she said.