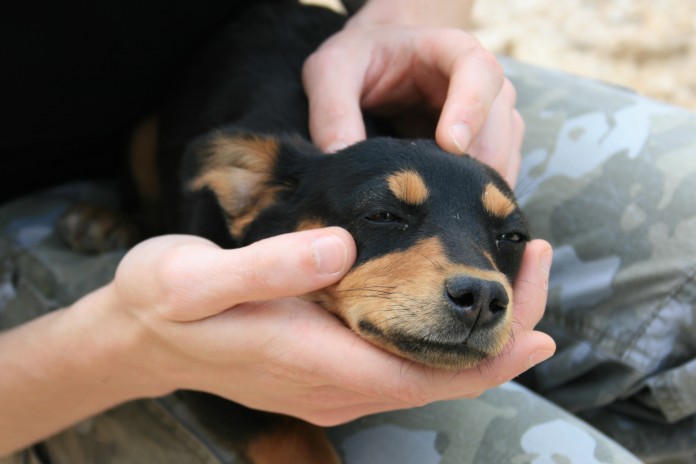 There’s a lot of confusion about marijuana vs. hemp and CBD oil vs. hemp oil for veterinary use. And lack of research is not helping. This post from Martha’s Vineyard Times clears the air on the suitability of hemp oil for treating animals.

I recently wrote about a dog who ingested marijuana, presenting the case in a fairly lighthearted manner, because marijuana toxicity in dogs is rarely life-threatening and the patient recovered uneventfully. But the subject is not humorous. In the marijuana-ingestion cases I have seen, the affected animals were frightened and distressed by their altered mental state. So when a client recently asked me about using hemp oil to treat her dog’s sleep disorder, my initial reaction was “No way!” Then I took a deep breath. I really didn’t know much about it. I decided to read up.

Cannabis sativa. First, I reviewed the difference between hemp and marijuana. Although technically a cannabis plant, hemp is a very different variety from marijuana. Cannabis may contain over 400 different compounds, but these vary widely from plant to plant, and from variety to variety. The compounds most widely studied are called cannabinoids, including tetrahydrocannabinol (commonly known as THC), and cannabidiol (CBD). Marijuana has been bred for high THC concentrations, and is cultivated for its leaves and tops, which have been used for thousands of years for recreational, religious, and medical purposes. It’s THC that causes intoxication. “Industrial” hemp looks completely different, and has different uses. Containing very little THC, it is grown for the stalk and seeds, which are used for textiles, foods, papers, body-care products, detergents, plastics, and building materials. The law has often lumped hemp and marijuana together, and cannabis was banned in the United States in the 1930s. In 2014 a change in the law permitted limited growing of industrial hemp. Concerning the legalization of marijuana, whether recreational or medical, the dispute continues between many states and the federal government.

Clearly cannabis derivatives have potentially important roles in treating many human ailments — glaucoma, seizures, chemotherapy-related nausea, and more — but our society is still struggling to decide what place marijuana should have in our culture. Recreational, like alcohol? Strictly medical, as a prescription drug? How do we insure safety and efficacy? How should we regulate it? The classification of cannabis as a substance with abuse potential has made it difficult for scientists to do research to inform these decisions.

Here’s some of what we do know. The pharmacologically active compounds in both hemp and marijuana vary depending on type of plant, part used, the plant’s age, where it is cultivated, and how it is harvested, dried, and stored. It is still unclear exactly what compound causes what effect, and how the various compounds interact. Current research suggests medically useful aspects of CBD may include antianxiety, antipsychotic, analgesic, antiinflammatory, antioxidant, and antispasmodic properties. Other cannabinoids are touted to have other uses. Marijuana and hemp derivatives have been proposed to treat everything from arthritis to Alzheimer’s.

Not surprisingly, manufacturers of animal products are anxious to cash in on the enthusiasm (and confusion) about cannabis by marketing industrial hemp products as “dietary supplements” for pets, and claiming all kinds of benefits. But because there is no regulation of these products, there is no way to tell what you are actually getting. And there is no scientific evidence about dosing, efficacy, safety, or quality assurance. In 2015, the FDA issued warning letters about several such companies, saying, “Some of these firms claim that their products contain cannabidiol (CBD). FDA has tested those products and, in some of them, did not detect any CBD. It is important to note that these products are not approved by FDA for the diagnosis, cure, mitigation, treatment, or prevention of any disease, and often they do not even contain the ingredients found on the label. Consumers should beware purchasing and using any such products.”

Leave it to Colorado to research further. A team from the department of clinical sciences at Colorado State University College of Veterinary Medicine did a survey with a company called Canna-Pet that sells pet hemp products. The results, published in the Spring 2016 issue, Volume 2, of the Journal of the American Holistic Veterinary Medical Association, reported over 60 percent of dog owners using Canna-Pet products felt these helped their pets “either moderately or a great deal” for an array of problems. The paper is appropriately entitled “Consumers’ Perceptions of Hemp Products for Animals,” because there were no controls, no double-blind studies, and no accounting for placebo effect, nor for whether the owners were themselves indulging in cannabis products. Seriously. I have read several companies’ websites. Some science, some pseudoscience, many big words — but it’s often difficult to locate hard information, like the exact milligrams of CBD in a product. For example, Canna-Pet says, “Our capsule products contain 170-510 mg of Canna-Pet hemp per serving.” That’s useless.

Now, my client wasn’t asking about marijuana. Good, because marijuana is not approved for veterinary use. It’s currently illegal for veterinarians to recommend or prescribe it, and doing so puts a vet at risk of losing his or her federal DEA license. She was asking about hemp oil, or CBD oil. Aha! More confusion. These are not necessarily the same. “Hemp oil,” although it may contain low levels of CBD, is primarily used as a body-care product, or for cooking. “CBD oil,” made from industrial hemp, is legal, but can contain varying (and minimal) levels of CBD. “CBD oil” made from medical marijuana contains much higher CBD levels, and can only be purchased by prescription, in states where medical marijuana is legal. What about “hemp seed oil?” According to the Hemp Industries Association, “CBD is not a product or component of hemp seeds, and labeling to that effect is misleading and motivated by the desire to take advantage of the legal gray area of CBD under federal law.”

I’m an open-minded child of the Sixties, but also a cautious and skeptical consumer. It’s too early to determine the full therapeutic potential of “industrial” hemp derivatives, but until we have better studies on quality, safety, and efficacy in dogs, I can’t recommend using these products. That’s your dog. Not a guinea pig … I wouldn’t recommend it for the pig, either.