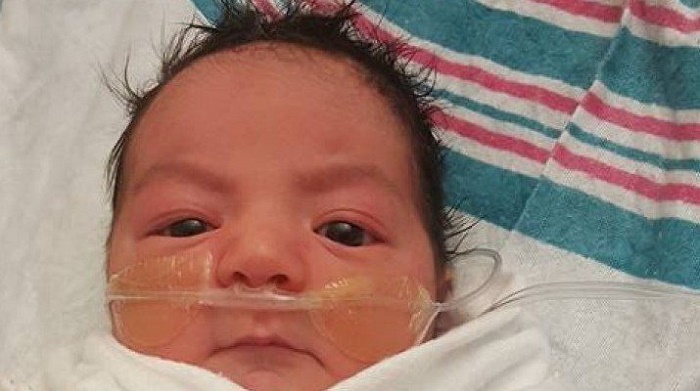 At Children’s Hospital Colorado, a two-month-old baby who suffers from violent seizures has become the world’s youngest infant treated with CBD oil. A few days after Amylea Nuñez was born on December 7, 2015, her parents, Nicole and Ernie Nuñez, found her lying unresponsive in her crib.

She then started having violent seizures every four hours or so. The seizures became worse, striking every two hours and then every 30 minutes.

At one point, Amylea experienced a seizure that lasted for more than an hour, and on two separate occasions, her heart stopped beating immediately after a seizure.

The Nuñezes live in Albuquerque, New Mexico, but after the medicine doctors had prescribed didn’t stop the seizures, Ernie and Nicole took their daughter to Children’s Hospital Colorado.

After their daughter was once again given medications that failed to stop the seizures, the couple began doing their research.

That’s when they learned about Charlotte’s Web CBD oil, which many have said could be an effective and safe way to treat epilepsy.

“We’re trying to use something different that’s not so bad on her body,” Ernie told reporters in Denver.

“After researching and month after month reading on it, we’re hoping it works because it’s a natural way and it’ll help her out.”

Initially, Children’s Hospital was reluctant to allow Amylea to receive the oil, but after Nicole and Ernie continued asking doctors to let them give the oil to their daughter, the hospital finally agreed.

And so far, Nicole and Ernie have reported what seems to be good news.

“She is a lot more alert today; she is looking around today and following our faces when we talk to her,” Nicole said, “whereas before when we spoke to her she did not react at all.”

While the hospital has agreed to allow Nicole and Ernie to give Amylea two doses of the CBD oil each day, doctors are still not allowed to prescribe cannabis-derived medicine to patients or to administer it themselves.

“Children’s Hospital Colorado does NOT prescribe or recommend medical marijuana,” the hospital said in a statement.

“We don’t yet have the science to fully understand medical marijuana and how it impacts children, which is why Children’s Colorado supports research to determine the safety and efficacy of medical marijuana.”

“If a family makes the tough decision to explore the use of medical marijuana Children’s Colorado will continue to provide care to these children.”

In early December, researchers conducted a study of CBD’s effects on children with epilepsy, and while many of its conclusions were tentative, the report suggested that CBD could be an effective form of treatment for young people with epilepsy.