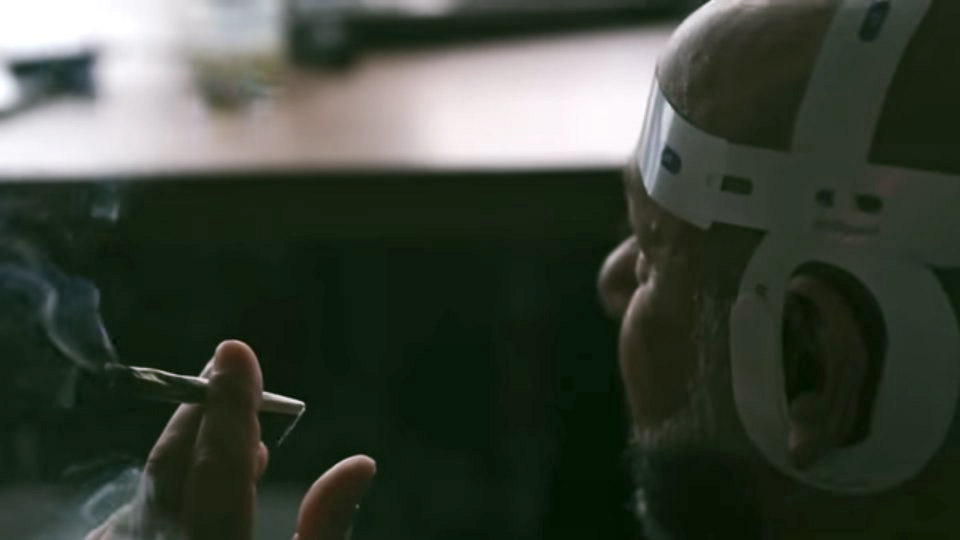 Potbotics is developing a cannabis recommendation system, designed for use by medical professionals, to tell which cannabinoids the patient best responds to. This post from Engadget reviews the trio of Potbotics products.

Medical cannabis, recreational cannabis; it’s getting hard to tell the two apart — even in states where only the former is allowed. Just look at your local dispensary. If it’s anything like my local weed shop, your cannabis choices are governed more by the brand name and relative THC content than they are the other active cannabinoids — you know, the ones with the actual medical benefits. This is great for your average stoner recuperating from a backiatomy, but for patients who really do need these complementary cannabinoid effects, guessing whether Blue Dream or Vallejo Sour Diesel will best help alleviate the effects of their chemo simply won’t do. That’s why the Bay Area startupPotBotics is working to put some real science — from a curation of existing scholarly articles and independent studies — behind cannabis recommendations.

PotBotics is developing a trio of products. There’s PotBot (above), a cannabis-recommendation engine launching in September that makes its selections based not on the strain, but on the relative cannabinoid levels that it contains. The BrainBot EEG device — aka an electroencephalogram, a device that measures your brain’s electrical activity through the scalp — serves as the back end of the recommendation system, giving medical professionals insight into how each cannabinoid affects the brain. And finally there’s NanoPot, an ambitious project that aims to analyze cannabis seed DNA to promote better cultivation.

In addition to its own EEG-based research, the company is working with Israel’s Hebrew University to gather data from large-scale clinical studies while avoiding the strict testing and research restrictions here in America. Cannabis’ status as a Schedule I drug has long hamstrung research efforts. Schedule I refers to weed’s ranking according to theControlled Substances Act of 1970. Such drugs, including cannabis, heroin, peyote and MDMA, are all considered to have “a high potential for abuse,” “no currently accepted medical use in treatment in the United States” and “a lack of accepted safety for use of the drug or other substance under medical supervision.” This not only makes cannabis illegal to use or possess under federal law, but also made any sort of research on it over the past 45 years nearly impossible.

The BrainBot EEG system, which is slated for release by the end of the year, is designed for in-office use by a general practitioner or neurologist for epilepsy and concussions, though David Goldstein, PotBotics co-founder and director of communications, says his team has also begun investigating its use in anxiety and PTSD. Ideally, he says, doctors will use the BrainBot’s FDA-approved differentiated EEG with a disposable head cap and a precisely measured, aerosolized cannabinoid mixture for the patient to inhale. By monitoring how the EEG’s differ before and after inhaling, doctors will be able to tell which cannabinoids the patient best responds to.

Ultimately, Goldstein hopes to find indicators of relief on those EEGs, specifically among what he describes as epileptic spikes. “An epileptic spike is very clearly defined in science,” he said. “It’s a spike in the alpha brainwaves. We’re working with those patients on [building] an EEG history — we can start looking at what cannabinoids levels really offer the best relief possible.” So, with epileptic patients, for example, Goldstein’s team is looking for a reduction in the magnitude of these alpha spikes, which would mean less frequent epileptic episodes.

In addition, the EEG would be used to monitor states of relaxation versus anxiety. “For anxiety, we’d be looking at the state of beta brainwaves,” Goldstein explained. “Betas generally indicate the relative state of relaxation for a patient, but appear ‘dim’ (and I know that’s not the scientific term for that) when a person feels anxiety.”

The company hopes to have patients first complete a baseline EEG, then another while “activating” their ailment. For arthritis, as an example, the patient would squeeze a tennis ball while being monitored. The differences between the two readings should provide clues as to how the ailment is affecting their alpha and beta brainwaves.

“A lower alpha wave spike (though it’s different from an epileptic spike) with a rise in beta waves indicates a deconcentration on that pain,” Goldstein continued. “So if you follow up with a cannabinoid dosage and see that pattern, you know it’s working.” From there, the company can build a quantifiable relief model based directly on specific cannabinoid molecules.

While this all sounds straightforward on paper, the actual process may not be so simple. Epilepsy isn’t a one-size-fits-all genetic disorder. There are more variations of the disease and its symptoms than there are Baskin Robbins flavors, Dr. Daniel Friedman, assistant professor of neurology at NYU Langone Medical Center’s Comprehensive Epilepsy Center, explains.

Generally, EEGs are used as secondary measures of a drug’s success (following whether or not the patient’s outward symptoms actually improve), Friedman told Engadget. However, for some studies involving photopath epilepsy — the kind that causes discharges when the patient looks at a strobe light — EEGs may be used as the primary measure of success. “There are well-validated studies that show if an EEG improves in response to a new medication in this population of patients, it will likely also be associated with a reduction of seizures down the line,” he said.

What’s more, for focal epilepsies (wherein the seizures originate in a single, specific part of the brain), EEG readings may not necessarily correlate with the frequency or severity of clinical seizures, or the patient’s response to new medications and treatments. “Some treatments for this kind of epilepsy actually increase the rates of interictal spikes [the smaller discharges that often precede a full-on seizure] even though they reduce the number of seizures,” Friedman concluded. “So I think it turns out that some of these features aren’t great markers for seizure risk.”

In fact, he goes on to say that many of the miraculous healing stories that make headlines and go viral on social media may suffer from bias. “There are people who have benefitted from CBD [Cannabidiol] just like any other medication,” he said. “I have some patients that will respond positively to a medication and others who will either not respond or actually worsen. And I think that’s the same situation with CBD. The problem is that when someone tries it and it doesn’t work, they won’t post a testimonial about it on social media. You don’t ever hear about the unsuccessful tries.” CBD is the second most prevalent of the 85 cannabinoids identified in weed, behind THC. It exhibits antioxidant and anti-inflammatory effects, plus it’s not psychoactive (i.e., it won’t get you high). CBD is marketed as a treatment for Dravet syndrome, a debilitating and severe form of childhood epilepsy, under the brand name Epidiolex.

Dr. Kimford Meador, professor of neurology and neurological sciences and director of the Epilepsy Monitoring Unit at Stanford University, was similarly skeptical in his assessment of PotBotics’ description of its technology. “They go into this thing about the different types of brainwaves,” Dr. Meador said. “I don’t even know what the hell they’re talking about with ‘alpha spikes.’ That’s a very odd term. … That’s not what an epileptic spike is. An epileptic spike is not a spike in the alpha brainwaves.” 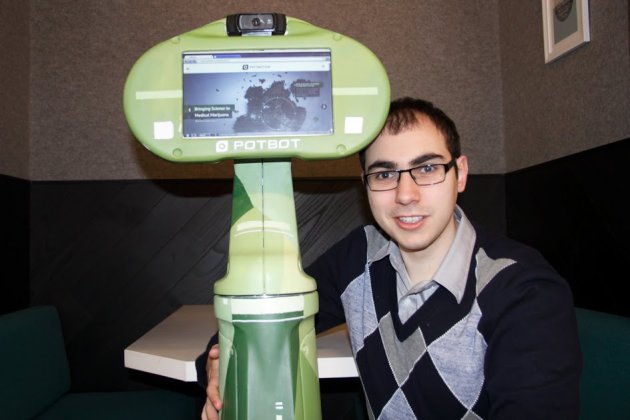 Normal EEG readings look much like the gentle swells of the ocean — a sine wave, basically. The alpha waves hum along at 8Hz to 12Hz when the brain is at rest, and sometimes other brainwaves like beta or theta will lie on top of the larger alpha. “An epileptic spike is when something sticks out like a shark fin or a submarine periscope,” Meador explained.

Meador also took umbrage with PotBotics’ definition of beta waves: “They go down and talk about anxiety and beta waves being related to a state of relaxation and I don’t think there’s good evidence for that, frankly. Beta waves tend to be seen more when someone is focused. Also beta waves can be generated by certain kinds of drugs.” Drugs such as Valium or phenobarbital can artificially generate beta waves, though Meador does not believe these “induced-effect waves” to be valid indicators of a state of relaxation. “I don’t think the science of that is very good,” Meador said. “So in all, I’m not very impressed with what they’re trying to do.”

PotBotics then quickly backtracked in the face of the doctor’s concerns. “After reviewing Dr. Kimford Meador[‘s] comments it became evident that there were a couple of miscommunications,” Goldstein wrote to Engadget via email. “The two primary misunderstandings were the terms ‘alpha spikes’ and the mix up of beta with theta brain waves. I should have kept neurological descriptions to the medical professionals, as I am not in a position to comment/describe QEEG [Quantitative EEG] analysis.” In that case, I guess we’ll have to wait until the device actually hits market to see if it works as advertised. 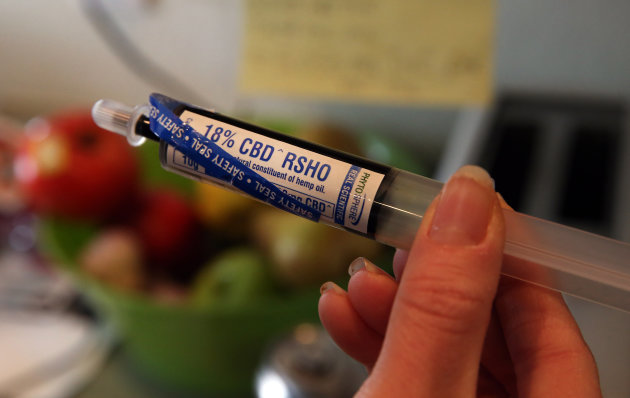 That said, how much faith should people be putting into CBD as an epileptic cure-all in the first place? “I think the jury is still out,” Friedman continued. “We certainly don’t have any solid proof that this treatment is effective and safe (and, in addition, any more effective or safe than existing treatments). And that is exactly why we need placebo-controlled [double blind] studies to see if this treatment is actually viable.”

The same skepticism should also be applied to emerging cannabis-based treatments and their diagnostics. We’ve only just begun to study the medical applications for cannabis in earnest and, at this point, it remains unclear if novel techniques like those employed by the BrainBot will be effective. That’s not to say they won’t be or shouldn’t be attempted, of course. However until the medical community has a more robust knowledge of cannabis’ active ingredients, new treatments like PotBotics’ EEG should be viewed with a healthy dose of skepticism.