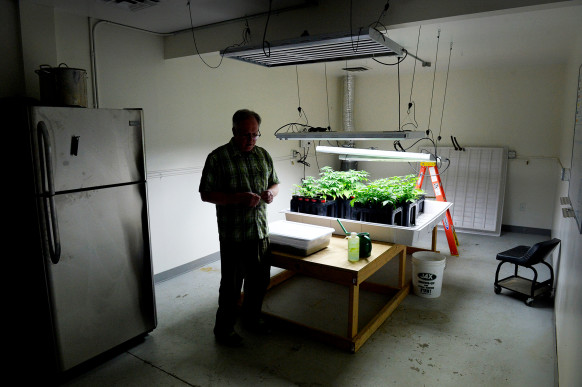 In this post from Wired, Lizzie Wade reports that as more and more states legalize medical and even recreational pot, CBD is coming under scrutiny again and scientists are scrambling to catch up with research on CBD.

PEOPLE HAVE BEEN growing and smoking marijuana for thousands of years, but it wasn’t until 1964 that anyone knew why it got you high. That year, the Israeli chemist Raphael Mechoulam isolated tetrahydrocannabinol, better known as THC, and went on to do groundbreaking studies on how and why marijuana affects the brain. But all along, he had his eye on another of cannabis’ chemical components, one that he had discovered a year before: cannabidiol, or CBD.

It didn’t get people high, but it seemed to have all sorts of other effects, including curbing seizures in laboratory animals and improving sleep in people with insomnia. In 1980, Mechoulam published the results of a small clinical trial showing that CBD reduced seizures in seven out of the eight epileptic patients tested, well outperforming a placebo. He expected funding for larger studies to flow in and drug companies to start calling. And then…nothing. “Nobody was interested,” he remembers.

That’s changing now. As more and more states legalize medical and even recreational pot, CBD is coming under research scrutiny again. The general hypothesis is that CBD is responsible for many of marijuana’s therapeutic benefits but none of its downsides—like, you know, getting high. (For many patients using marijuana to treat symptoms like pain and nausea, the altered state of consciousness THC induces is an unwanted side effect.) Some states, including Alabama and Florida, have even legalized CBD for medical use while keeping THC illegal.

Scientists are scrambling to catch up with the hype. Medical marijuana is difficult to study, especially in the US. It’s a Schedule 1 drug, and researchers hoping to work with it need approval from several federal agencies, including the Drug Enforcement Administration. “I think it does inhibit ordinary investigators who don’t have the means or the knowledge or the staying power to get through the system,” says Igor Grant, the director of University of California’s Center for Medical Cannabis Research.

Plus, pharmaceutical companies shy away from funding studies of smoked cannabis because they can’t make their money back by patenting and selling the plant. Even now, research on CBD hasn’t moved much beyond Mechoulam’s tiny clinical trial.

Here’s what scientists know. CBD doesn’t act on the same receptors in your brain as THC does, although it does interact with the enzymes that metabolize THC, potentially keeping you from absorbing it too quickly. CBD also interacts with many other receptors in what’s called the endocannabinoid system—basically, the chemicals your brain produces that resemble the components in marijuana and the receptors that react to them. (The fact that our bodies produce these compounds naturally explains why marijuana works on us at all.)

It also seems to affect other receptors as well; for example, the way CBD enhances the activation of the 5-HT1A serotonin receptor might be the secret behind its success at treating some symptoms of schizophrenia, says Roger Pertwee, a pharmacologist at the University of Aberdeen in Scotland who has been studying cannabis since the 1960s. Or maybe its anti-psychotic properties stem from the way it prevents another neurochemical, anandamide, from breaking down too quickly, as a 2012 paper in Translational Psychiatry suggested.

That kind of hyper-technical uncertainty is pretty typical of research on CBD. Mostly, researchers focus on studying its effects, whether or not they fully understand the mechanisms behind them. Pertwee listed for me the conditions CDB has shown some promise for treating: in addition to schizophrenia,
there’s anxiety, depression, nausea and vomiting, certain types of pain, stroke, morphine dependency, Parkinson’s disease, Huntington’s disease, neurodegenerative disorders, epilepsy, cancer, diabetes, osteoporosis, inflammatory bowel disease, psoriasis, and arthritis. It might even have antibiotic properties. CBD “does seem to be a wonder drug is some ways,” Pertwee says. “A potential wonder drug.”

The key word there? Potential. Almost all of these studies were in petri dishes or animals, with a few small human studies here and there. What’s missing are the large double-blind, placebo-controlled studies that are the gold standard of pharmaceutical research, says Raul Gonzalez, a psychologist at Florida International University who studies the effects of marijuana on HIV/AIDS patients. “Without those types of studies, marijuana still falls short of the minimum threshold that we expect for our medicines.”

A few of those studies are now in the works when it comes to CBD-only products. GW Pharmaceuticals is running a Phase III clinical trial of a drug called Epidiolex, which is intended to treat severe epilepsy in children. Meanwhile, Insys Therapeutics is moving toward clinical trials of synthetic CBD. If approved, those drugs will be available by prescription, with standard dosages and a list of recommended uses. (Pure THC and a THC/CBD combo are already available as prescription drugs.)

As of now, FDA-approved pills are not how patients get their CBD. Some of them buy CBD oil; others opt for plants marketed as low-THC and high-CBD. The most famous of those strains is probably Charlotte’s Web, which families with severely epileptic children have been moving to Colorado to get. But no one regulates these products or tests them to confirm they contain what they say they contain. That worries a lot of scientists and physicans. “If somebody told you when you go and buy Tylenol, ‘you know, we really can’t guarantee that it has the amount of milligrams that we’re saying it does on the label,’ you’re probably going to be hesitant,” Gonzalez says.

Two studies getting underway in Colorado might shed some light on whether existing CBD products might help children with severe epilepsy. One, led by Kelly Knupp, a pediatric neurologist at Children’s Hospital Colorado, will track 110 children over 12 weeks as they begin taking high CBD products in hopes of curbing their seizures. A preliminary study Knupp ran of families with children already taking CBD found that about a third of them reported a 50 percent-or-greater reduction in their children’s seizures once they started the drug. Although any effect is promising for kids with epilepsy who don’t respond to other medication, Knupp points out that the one-third number isn’t much bigger than the placebo effect observed in studies of other epilepsy drugs.

Meanwhile, another study at Children’s Hospital Colorado, led by toxiocologist George Sam Wang, will look at how childrens’ bodies metabolize CBD products, and how the compound might interact with other seizure medications they are already taking.

Lots of researchers hope that CBD lives up to its potential. But when it comes to developing a new medicine, it’s their job to be skeptical until it’s proven safe and effective, with a set dosage and a known list of side effects guiding patients’ and doctors’ decisions. “I think CBD is a very promising compound, and it probably has helped a lot of people,” says Jahan Marcu, the senior science advisor for Americans for Safe Access, a medical marijuana advocacy group. “But in order for it to consistently help people, formulations need to be standardized and manufactured according to best practices. I don’t think that’s too much to ask.” That’s all Raphael Mechoulam wanted in the 1980s, too.

via Researchers Are Finally Studying the Other Chemical in Pot | WIRED.