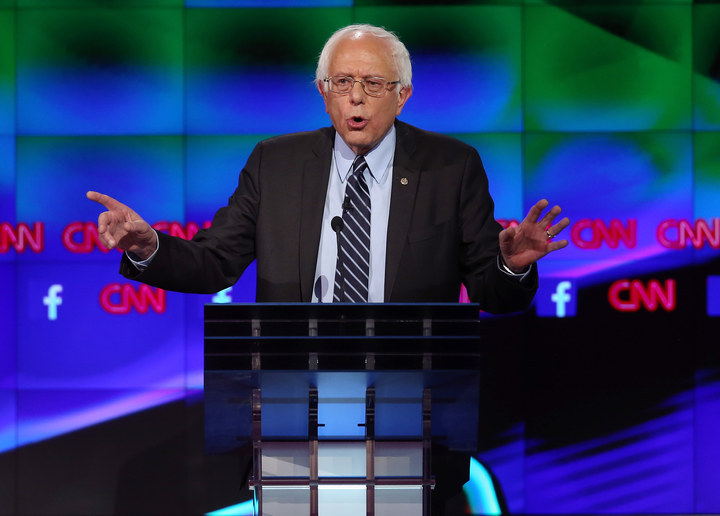 Marijuana legalization advocates say Bernie Sanders became the first major presidential candidate to call for legal marijuana during Tuesday’s debate. This post from BuzzFeed News reports that the Sanders campaign is more cautious, but it’s clear the shift advocates were looking for has come.

The first Democratic presidential debate on Tuesday wasn’t the splashy policy rollout marijuana legalization advocates wanted, but it was enough to convince them Vermont Sen. Bernie Sanders has finally come around to their point of view, adding another cadre of progressives to his army of grassroots supporters.

It came near the end of the debate, and it wasn’t even a question about national politics.

“Sen. Sanders, right here in Nevada, there will be a measure to legalize recreational marijuana on the 2016 ballot,” CNN debate moderator Anderson Cooper asked. “You’ve said you smoked marijuana twice; it didn’t quite work for you. If you were a Nevada resident, how would you vote?”

“I suspect I would vote yes,” Sanders replied.

And with that, advocates say, Sanders made history for proponents of legal weed everywhere, and the praise from legalization groups quickly rolled in.

“This is the first time we’ve seen a major candidate for president say he’d probably vote for legalizing marijuana if given the chance,” Tom Angell, president of Marijuana Majority, told BuzzFeed News. “That says a lot about how far the politics on this issue have shifted in a very short amount of time.”

“It is clear that Sen. Sanders is on the winning side of history when it comes to marijuana legalization,” said Bill Piper, director of national affairs at Drug Policy Action, the political arm of the pro-legalization Drug Policy Alliance.

“The people have typically led the politicians on this issue, and finally we’re seeing a presidential candidate who appears to have caught up with them,” said Mason Tvert, the top communications strategist at the Marijuana Policy Project. “Politicians are evolving on this issue, and Sen. Sanders is the first presidential candidate to stop dragging their knuckles when it comes to marijuana policy.”

On the debate stage, Sanders couched his support for the recreational marijuana legalization ballot initiative as a logical part of his claim that the American political system is “rigged” against the middle class and that the criminal justice system is often inherently biased against minorities.

“I would vote yes because I am seeing in this country too many lives being destroyed for nonviolent offenses,” Sanders said. “We have a criminal justice system that lets CEOs on Wall Street walk away, and yet we are imprisoning or giving jail sentences to young people who are smoking marijuana. I think we have to think through this war on drugs, which has done an enormous amount of damage. We need to rethink our criminal justice system; we’ve got a lot of work to do in that area.”

The answer put Sanders to the left of former Secretary of State Hillary Clinton, the front-runner for the Democratic nomination and Sanders’ chief rival on the campaign trail. She condemned imprisoning marijuana offenders at the debate, but said she was still studying the effects of legalization on states like Colorado and Washington and remained unwilling to take a position on legalization until she knows more.

Sanders has kept some distance from marijuana legalization advocates on the presidential campaign trail, for the most part, while embracing much of their politics when it comes to criminal justice and the cost of the war on drugs.

“Colorado has led the effort toward legalizing marijuana and I’m going to watch very closely to see the pluses and minuses of what they have done,” Sanders said in aReddit AMA earlier this year. “I will have more to say about this issue within the coming months.”

In a June interview with Katie Couric, he talked about law enforcement concerns that “see this as an entry-level drug with leads to coke, which leads to heroin and so forth.” But he also said his personal view was that marijuana was less dangerous than alcohol. In May, he said he was studying writings from the 1970s advocating the abolition of all drug laws.

“My suspicion up until now has been that he’s been with us but he’s been looking for the right time to say so,” Angell said.

After the debate, advocates said it’s time for Sanders to become the face of marijuana legalization in the Senate.

“It would be politically beneficial for him to introduce legislation in the Senate ending federal marijuana prohibition,” Piper said.

The Sanders campaign, however, is taking things more slowly.

“He was asked a question about marijuana legalization, and I think he gave the answer he gave, and I think it was the right answer given what we’ve seen with the impact of the war on drugs,” Jeff Weaver, campaign manager for Sanders, told BuzzFeed News after the debate ended.