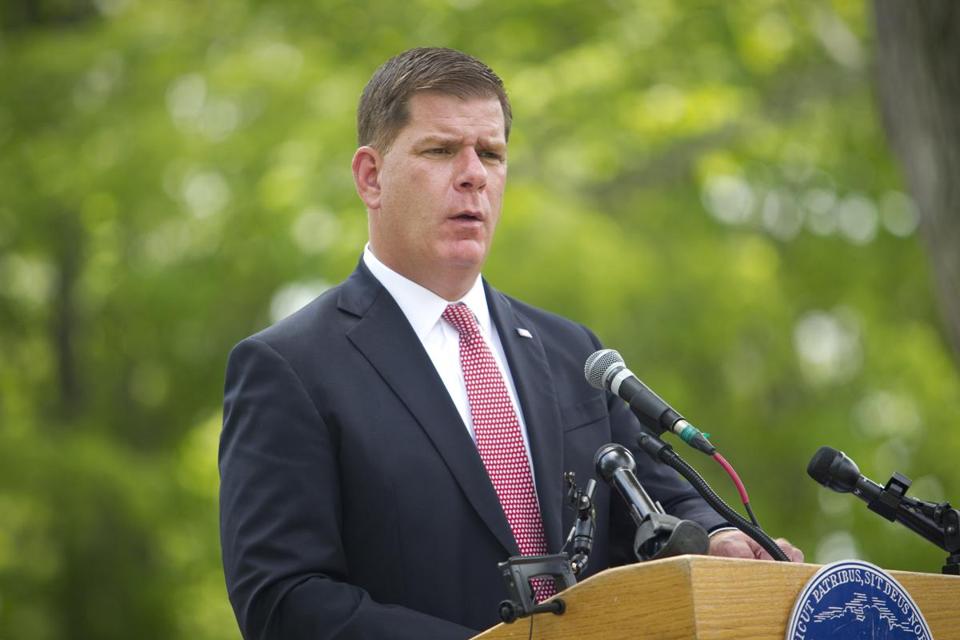 In this post from Metro, Joshua Miller reports that Boston Mayor Marty Walsh would “absolutely” be willing to take the lead opposing the anticipated marijuana legalization effort in 17 months.

With a major battle in the making over marijuana legalization next year, Mayor Martin J. Walsh, a recovering alcoholic and a passionate advocate for those struggling with drug addiction, is emerging as the most likely face of the opposition.

Walsh said he would “absolutely” be willing to take the lead opposing the anticipated referendum in 17 months, presuming no other high-profile leader steps forward.

“I just think it would be a mistake to legalize marijuana in Massachusetts,” said Walsh. “I’ve seen too many lives ruined by starting to smoke weed and then, eventually, going to other types of drugs.”

Governor Charlie Baker, Attorney General Maura Healey, and Suffolk District Attorney Daniel F. Conley all oppose legalization, but none appears keen to lead the charge against the expected 2016 ballot question to legalize marijuana for recreational use.

There is political risk in opposing a referendum many pundits and elected officials expect to pass. Strong majorities of Massachusetts voters approved measures that decriminalized possession of small amounts of marijuana in 2008 and allowed its use for medical purposes in 2012.

But Walsh’s position is a matter of conscience, according to aides. Even as mayor, he still personally helps people struggling with addiction find beds in rehabilitation facilities, they said.

One adviser said Walsh feels strongly enough about opposing legalization “that he is willing to use his political capital to let people know that he is not in favor of it.”

While efforts to get a statewide ballot question have been in the works for years and a handful of groups are building infrastructure and raising money for a push, the opposition appears to have less formal organization and a less public and passionate voice.

Walsh, viewed favorably by about two-thirds of Boston registered voters, according to an April poll , could change that.

“The most important thing you need for a ballot question is to introduce emotion into the debate,” said Steve Crawford, a Democratic strategist who has been involved in a number of state ballot campaigns. “And on this issue, no one has greater credibility than Mayor Walsh, and he is a formidable voice for families struggling with substance abuse.”

In a telephone interview, Walsh was animated about the issue, saying legalization in Colorado, one of four states and the District of Columbia that have approved it, has been no panacea. And he dismissed arguments proponents make for marijuana legalization.

“I view it as a gateway drug,” he said. “Some people can, I guess, smoke it recreationally and they don’t get addicted to it, but there’s a large number of people that are in recovery now or that are struggling on the streets with addiction, and they got their start by smoking weed.”

Asked about arguments from legalization backers about racial disparities — that marijuana arrests disproportionately affect people of color — Walsh had a sharp response.

“So because of racial disparities we legalize a drug that potentially could kill people, lead to death?” the mayor asked with incredulity. “I don’t think that’s a good enough reason to do it.”

Matt Simon, New England political director for the Marijuana Policy Project, which is involved in the push for legalization in Massachusetts in 2016, said the mayor is “in denial” about the reality of marijuana use in the state.

Despite the best efforts of law enforcement over decades, marijuana is “widely available and widely used,” Simon said. And “marijuana is not known to have ever caused a fatal overdose.”

Beyond the familiar arguments though, is the question of who might lead the antilegalization charge or, at least, be its political face.

In a State House interview, Baker, a Republican, said he isn’t afraid to speak about his opposition to legalization when he is asked.

Yet, the governor said, “while I’ll certainly make my opinion known, I fully expect I’ll be working on other stuff most of the time that’s related directly to the job I’ve got here.”

Healey, the Democratic attorney general, reiterated her opposition to marijuana’s legalization through a spokesman, Christopher Loh. But, he added, she is “also mindful that any ballot petition” would have to come through the attorney general’s office and she “will respect that process.”

A spokeswoman for Conley, the Suffolk prosecutor, said in a statement that all of the state’s district attorneys have voiced opposition to legalization.

But, the spokeswoman, Renee Nadeau Algarin, emphasized that elected officials are not the only people “whose voices need to be heard.” She said leaders in the “medical, education, and youth services fields all have important roles in informing the communities they serve about the consequences of legalizing marijuana. Conley certainly hopes to hear those voices echoing the same opposition and deep concern raised by the state’s political leaders.”

Speaker Robert A. DeLeo has expressed opposition to legalization, but is not expected to campaign against it in 2016.

As with any political campaign, there is the question of money.

Joe Baerlein, a veteran state ballot question strategist who is not currently involved in either side of the legalization debate, said he expects any 2016 legalization question to be a tough and expensive — millions of dollars — campaign for both sides.

For the “no” side, beginning “with Mayor Walsh, that’s a hell of a start,” and he could be a significant catalyst for helping to raise funds, Baerlein said.

But, he continued, “you have to build a statewide campaign.”