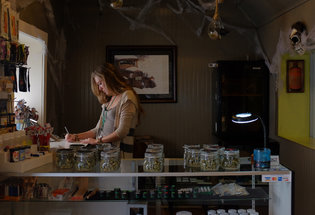 This post from The New York Times reports how Colorado’s surging Marijuana Tax revenues have created an unusual fiscal straitjacket for the lawmakers.

After Colorado voters legalized marijuana, they also approved heavily taxing it and using the money for school construction, law enforcement, drug education and other useful things. The arrangement made perfect sense.

But now the 15-month-old experiment has entered a phase that makes no sense at all. It’s the prospect that all this new marijuana revenue — an estimated $58 million in the current fiscal year — may have to be returned to the voters, because of a provision in the state’s Constitution that rigidly constrains taxes and spending. The provision is the Taxpayer’s Bill of Rights, or Tabor, a complex set of rules that requires, among other things, voter approval of all new taxes and automatic refunds if tax revenues or spending exceed estimates given when tax questions are put to the voters.

As an April 1 report in The Times explained, Colorado’s tax revenues have recently surged, thanks in part to the booming construction, oil and gas industries, in addition to some $58 million from the marijuana taxes. But not only revenues but overall state spending this year are expected to end up higher than the state estimated back when the marijuana tax was on the ballot. Under Tabor — which some in Colorado have likened to a fiscal straitjacket or a statutory version of the crazed space computer HAL 9000 — the state is therefore required to refund the marijuana money.

But lawmakers don’t want to give the money back. They argue that marijuana was always supposed to pay for itself, that school spending in particular is a vital public priority and that the general fund should not be tapped to make up for one missed revenue estimate. They are also vexed by the question of who should get the money — weed growers and buyers, or the general public? — and how to give it back.

Lawmakers are now scrambling to put together a bill that would let them go back to the voters with a ballot measure asking their permission to keep the marijuana money. Whether voters will grant it is unclear.

Since marijuana legalization took effect last year, Colorado has made impressive gains in setting up a new industry and maintaining public support for it, despite the administrative challenges and the ominous threat of federal intrusion. Tabor was added to the state Constitution in 1992 by voters who bought its seductive argument that government needs shrinking, always and forever. Ever since, lawmakers and concerned citizens have lamented the constraints Tabor has placed on the state’s ability to adequately and flexibly fund pressing public needs, like infrastructure and education, or to save for rainy days.

The bill now being cobbled together could lead to a short-term fix allowing the marijuana money to be retained and usefully spent. A more lasting repair will come when voters undo the damage that anti-tax zealotry did to their Constitution.

via The Glitch in Colorado’s Weed Experiment – NYTimes.com.