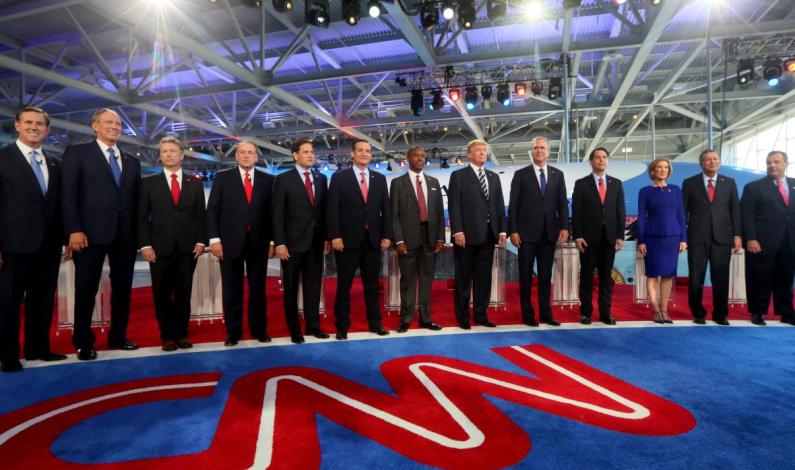 The 2016 Presidential hopefuls engaged in a serious discussion on the sanctity of state marijuana laws, and the drug war during a recent Republican debate. This post from The Daily Chronic presents and summarizes the discussion of the Presidential candidates.

At nearly the two and half hour mark in Wednesday night’s marathon Republican debate on CNN, Jake Tapper directed a question from the online audience, indicating it was very popular, to Senator Rand Paul regarding Colorado and other states having recently legalized marijuana by popular vote on binding initiatives, that if elected president of the US Governor Chris Christie recently said ‘the people of Colorado should enjoy their pot now because if elected by 2017 I’ll be going after them to shut down’, imploring Senator Paul to respond to Christie’s clear threat to state autonomy in states like Colorado (along with Alaska, Oregon and Washington too).

Senator Paul indicated that he supports the 10th Amendment and states rights, that the drug war has racist outcomes, that rehabilitation is preferable to incarceration, expanding drug courts, indicated the war on drugs is a failure, and that individuals on the stage are hypocrites for their youthful marijuana use. Governor Jeb Bush apparently took that to mean him…where he extolled the virtues of Florida’s drug courts. Paul retorted that Bush didn’t support medical access to marijuana. Bush claimed that he did, but only the way the legislature in Florida recently passed restrictive laws (‘Not Colorado-like laws’), that he didn’t support the 2014 effort to pass medical marijuana laws via a ballot initiative and that he voted against it.

The next two candidates took the opportunity to try to have it both ways, first with Christie extolling New Jersey’s recently passed ‘rehabilitation over incarceration’ legislation and that the “war on drugs is largely a failure”, but, non-sensibly, then goes on to bluster and re-affirm his virulent opposition to marijuana legalization, claiming marijuana is a gateway drug (which simply is not supported by science or data). He exclaimed to Paul ‘if you want marijuana legalized, pass a law in Congress’.

Then former Hewlett Packard CEO Carly Fiorina took the unsolicited opportunity to gratuitously mention her son’s addiction and death from drug overdose (self-evidently not from marijuana), that marijuana is a gateway drug, is way more potent (‘Then when Jeb Bush smoked it”)…but, then, incongruously, she insisted that the war on drugs is a failure, prisons are overcrowded and that “what we’re doing is not working”.

Distilled: Three of the Republican candidates indicated the war on drugs is a failure (Paul, Fiorina and Christie), one candidate (Bush) indicated that the federal government has an important role to play against drug use.

One candidate supported medical access to marijuana and states rights (Paul); one candidate claimed to support states rights and limited access to medical marijuana (Bush); one candidate supported medical access to marijuana, but would use federal law to stop states from deviating from federal policies they no longer support (Christie) and a candidate will use the death of their child to advance inaccurate and unscientific claims–while at the same time wanting credit for identifying the problems that contributed to their son’s plight, while making no indication how if at all they’d allow states autonomy to make policy decisions independent of the centralized federal government (Fiorina).