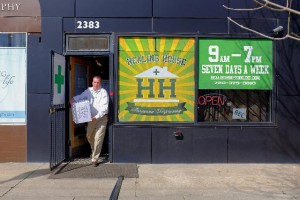 This post from Tsepa reviews the very real possibility of a conservative Republican President being elected and getting tough on pot.

The election of a conservative Republican as President could roll back the gains made in the legalization of marijuana. New Jersey Governor Chris Christie took a bold stand recently and said if he were elected, he would work to reverse what has happened under President Obama. While its doubtful Christie would be elected President, it isn’t that improbable that a conservation republican could be elected over Hillary Clinton and get tough on pot. While most people in the cannabis industry dismiss such talk, it’s a very real possibility.

Dan Riffle, Director of Federal Policies at the MarijuanaPolicy Project said, “I’m not worried about the next president rolling back marijuana reform; those days are over. First and foremost, marijuana polls better than any candidate from either party—you’re not going to get elected if part of your campaign involves rolling back marijuana laws more popular than you. The fact that Colorado is a swing state helps here. Second, the DOJ’s policy of deference toward the states wasn’t just written because it’s the politically popular option, but because, legally, there’s very little the federal government can do. Every lawyer and law student who made it through their first year of law school knows the feds can’t force the states to criminalize marijuana, and the Justice Department just doesn’t have the resources to enforce federal law on its own without the states’ cooperation.” The Federal Government though can make life very difficult for those in the cannabis industry if they get that mandate from the top.

We do know that a new Attorney General under a conservative president with a policy to get tough again would hurt the blossoming cannabis industry. If Congress doesn’t reschedule the classification of marijuana, a new sheriff in town could reverse the Cole Memorandum. He or she could instruct agents to disregard the state’s laws and crack down. Congress could be pushed to roll back legislation that tells the Federal government to not spend money on cracking down on controlled substances. The war on drugs could return.

While many polls do show more Americans favoring legalization of marijuana, even amongst Republicans, it’s still not a huge number. In 2008, only 23% of Republicans were in favor of legalizing marijuana according to Gallup polls. A more recent Gallup/Pew Research Center poll said that number grew to 39% in 2015. Those are big gains and fast ones, but it’s still way below Democrats that favor legalization by 59%. When you check with conservatives, they are 2 to 1 against legalization.

Adam Bierman of MedMen, a marijuana consulting group said, “The genie is already out of the bottle and you can’t put it back in. You can’t ask a state like Colorado that went from operating with deficits to rolling in tax dough to give up that money.” But it’s been done before when prohibition was initiated. John Hudak of the Brookings Institute recently wrote, “Federalism is often popular with the GOP base, and hailing “states rights” is often times a safe bet on uncomfortable issues. On the flip side, values votes still have a loud voice within the party – particularly in the primary electorate- and some Republicans have carved out firm opposition to marijuana, suggesting for pot policy, their administration’s position will be simple: just say no.”

So where do the leading Republican candidates stand on this issue? Not all of them are as clear as Chris Christie or Rand Paul, but it’s worth looking at past quotes to get an idea.

Rand Paul will grab many Democratic voters that don’t like Hillary Clinton just because of his straight talk when it comes to cannabis. He frequently points out that minorities suffer more from the issue of marijuana arrests and this will get him many non republican votes as well. Paul recently co-sponsored the CARERS Act which reschedules the classification of marijuana and allows for medical use research. So he is firmly in support of medical marijuana.

When it comes to Florida, many expected that the state would easily get 60% of the population to vote in favor of medial marijuana recently, but it didn’t happen. Their was a fierce battle mostly funded by the big Republican donor Shel Adelson. Jeb Bush (who admitted he smoked pot in college) sided with the opponents of the initiative. He issued a statement that suggested legalization could harm the state’s reputation as a family friendly place. “Florida leaders and citizens have worked for years to make the Sunshine State a world-class location to start or run a business, a family-friendly destination for tourism and a desirable place to raise a family or retire,” Bush said.“Allowing large-scale, marijuana operations to take root across Florida, under the guise of using it for medicinal purposes, runs counter to all of these efforts,” he added. “I strongly urge Floridians to vote against Amendment 2 this November,” he said. So if Bush is elected, the cannabis industry should be worried.

via A Republican President Could Kill The Cannabis Industry – Tsepa.