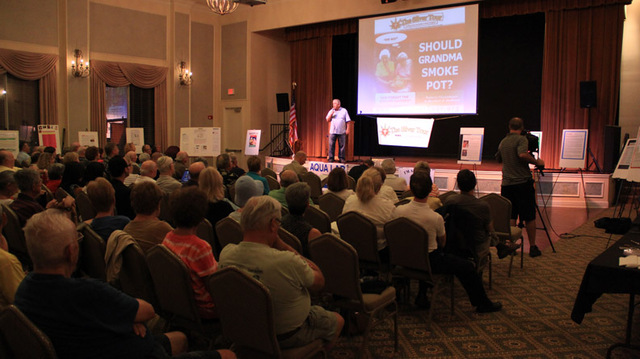 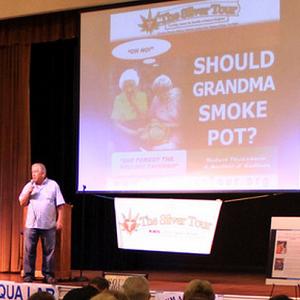 Statistically speaking, senior citizens are the most likely demographic to oppose marijuana reform. That’s a big problem when you also consider the fact that senior citizens vote at a higher rate than anyone else. Whenever I look at polling for certain campaign efforts, I always look at the senior citizen polling first. I always sit and daydream about how easy it would be to end marijuana prohibition in state after state if the marijuana reform movement was able to get even a small percentage of those ‘no’ senior citizen voters to change to the ‘yes’ side.

It seems like so many campaigns, organizations, and reform efforts quickly disregard the senior citizen demographic, as if it’s just hopeless and no one should even try to change seniors’ minds. A truly comprehensive campaign strategy (or awareness strategy leading up to the launch of a campaign) would have a plan in place to reach seniors. If only there was an easy way to do that…

Insert Robert Platshorn, and The Silver Tour. Robert Platshorn is probably the most dynamic public speaker I have ever seen from the marijuana movement, and maybe anywhere else. I first heard him speak at the 2012 High Times Medical Cannabis Cup in Los Angeles. Within seconds of grabbing the microphone on a panel dealing with reform efforts, the entire crowd (including and especially myself) was captivated and hanging on his every word. He has a way of putting some amazing humor together with cannabis reform educational facts that leave you always wanting more.

I don’t think that’s a coincidence, because Robert Platshorn was one of, if not the, original pitchman (feel free to factcheck). Whether he was the first or not is irrelevant, because he is definitely a stellar public speaker regardless. Jay Smoker and I have always wondered why every campaign and organization in America doesn’t swoop him up and put him on a senior citizen center tour across America. Imagine how many minds would be changed?

Robert Platshorn served almost three decades in prison for smuggling marijuana. When he got out of prison (the longest one served for marijuana only offenses in US history), Robert instantly went to work trying to reform marijuana laws. He created The Silver Tour, which is an awareness organization that educates seniors about the benefits of marijuana reform. Seniors listen to Robert because he is a senior citizen himself, in addition to being an all around amazing person.

He is currently doing a radio ad campaign, which is extremely effective. Each 60-second marijuana ad reaches a significant amount of people, and since Robert has the hookup, spots can be as cheap as $5.00 per slot in a big media market. That’s bang for the buck! Honestly, if you work with a campaign, or organization, you really, REALLY need to get Robert on your team. He can change more minds as one person that a small army of other people. Trust me. If you doubt what I’m saying, just hang out with him for a brief period of time, and you will be convinced. Donate to The Silver Tour at this link here. Go get ’em Bobby Tuna!

Source: How To Get Senior Citizens To Vote For Marijuana Reform | The Weed Blog