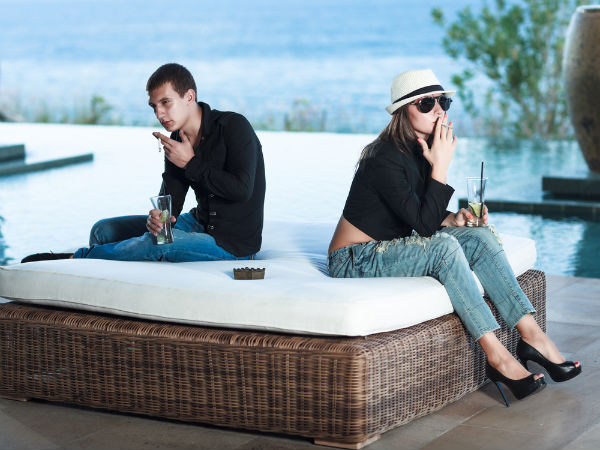 With recreational marijuana legalized in 4 states, questions about weed’s effect on relationships are doing the rounds. This post from Cosmopolitan brings together the first hand opinion of eight readers on what smoking marijuana does to dating.

​Now that 23 states and DC have legalized weed, 4 of them for recreational use as well as medical, the debate about whether it enhances – or ruins – sex and relationships is raging hotter than ever. Can a couple survive when only one is a pothead? Does weed make sex mind-blowing or forgettable? Here, eight readers light up the highs and lows of dating in the stoned age.

“My boyfriend and I both smoke weed, and that’s just a part of our lives. Just like I do yoga and he rides bikes, it’s just another thing. We buy weed together. He packs bowls for me — he’s the organizer of all the weed stuff, and I just smoke it. My boyfriend is an engineer for a tech start-up, and I run my own business as a web designer. We both attribute the amount of weed we smoke — we light up almost every day — to the fact that our jobs are so highly technical. It helps us turn our brains off from that mode. If you’re a functional pothead, you don’t have to think twice about it.”​ – Emily, 28, web designer, San Francisco, CA

“My boyfriend is pretty much the only person I smoke with…at home, at night, or on weekends during the day. When we have sex after smoking, there’s definitely more of an observational quality to it. I’m kind of outside myself, observing, instead of in it and in my head. A kind of cool detachment happens. And afterward, I feel like I’m more open to talking about something that happened or something that I liked. Alcohol for me is definitely a depressive experience. I used to have so much fun when I drank, and now it’s just not that fun anymore. When I smoke, I like who I am a little bit more, and I’m able to express myself better.” – Kristin, start-up founder, NYC

“I was dating this guy who was otherwise very sweet and wonderful, but there was an addiction issue. He couldn’t go to parties without knowing at what point in the night he’d get to go back to his place, or go somewhere else, and smoke. The only way he could get out of bed or get ready for the day (he was in school at the time) was to smoke. It was embarrassing to have to explain to friends. There’s a difference between the casual stoner who prefers smoking to drinking and the guy who can’t have normal social behavior. It got to a point where I just became so frustrated with the inconvenience. It really doesn’t work for me to be out at a restaurant or have plans to go see a play later and for him to say ‘I can’t because I have to go smoke.’ That necessity was totally disruptive. It was like having a third person in the relationship. I broke it off.”​ – Lee, 24, fundraiser, Boston, MA

“Depression has run in my family for generations. I started going to therapy for it in sixth grade. I’ve tried every antidepressant under the sun, and nothing ever really worked for me. But I keep taking them just to keep it in check. Now I’m taking Celexa. In college, I had no sex drive whatsoever. I bounced around on different medications to try to fix that, and nothing really helped until I tried smoking. Now, I am an everyday weed smoker, and I do think it helps my depression…and my relationship with my boyfriend. When I smoke, I get very relaxed and super horny. I’m like a ravenous frat boy. I had a boyfriend with a very low sex drive, and it was too much for him. It was always a point of contention. But my current boyfriend loves it!”​ – Meghan, 29, journalist, NYC

“My boyfriend is super supportive of me being in this industry, working for a vaporizer company. He’s a musician, and cannabis and music often go hand in hand. He’s totally supportive and actually very helpful. All his friends come over and try the vaporizers, giving real-time feedback. The way dating is today, the girl can be the aggressive one, going after the guy. A bunch of my friends don’t use cannabis, and they’re like, ‘How do you do that?’ And I’m like, ‘You just invite them over to hit the vape.’ Then the guys are like, ‘Oh my god, this is the coolest girl ever. I want to marry her.'”​ – Brianna, 28, director of marketing for a vaporizer company, Nashville, TN

“I love my boyfriend so much, but when he is stoned, he becomes a different person. He’s totally out of it and quiet, and his breath and saliva taste really different and not appealing. He has this one friend he’s always smoking weed with, and I think that’s also what bums me out most. The fact that when he gets with this one friend, it’s all about doing drugs. I just feel like when you get into real life — aka after college — it’s important not to have your social activities revolve around drugs, no matter how innocuous they seem.”​  – Emily, 26, writer’s assistant, Los Angeles, CA

“I seem to gravitate toward a certain type. They are always creative and very passionate about what they do, but they also happen to be very big pot smokers. It’s like they need pot to enrich their creative selves. They become so dependent on smoking all the time that you don’t know if you like the person better stoned or not stoned. It gets to the point where it is confusing what their true nature is. With one guy I dated, smoking was so much of who he was, I never really knew when he was and wasn’t high, what was his pure nature and what was his stoned nature. I think I liked him better high — he was less edgy. But I would question myself. Is it bad that I like his altered version more? Pot can definitely make it hard to connect, especially when you’re first getting to know someone.”​ – Jillian, 25, graphic designer, NYC

“I am more likely to have drinks on a date than smoke weed. Even though weed is legal in Colorado, you can’t smoke in restaurants or some other public places, so it usually happens at someone’s house. My friends always said having sex while high on weed was so good that you shouldn’t do it, because you wouldn’t enjoy sober sex as much. They were right — when I tried it, it was awesome. High sex makes your mind and body more sensitive to pleasure, and in comparison to drunk sex, it’s less…aggressive? You don’t remember the act of it as much as the feeling because you are in another state of mind. I had a bad experience with weed a couple of months ago where I fainted, so I stopped smoking. Even though I liked high sex, I think it’s more important to enjoy sex with your partner sober because you’re more focused on each other’s needs, rather than just being horny because you’re high.”​ – Christina, 22, marketing student, Boulder, CO

Source: What Smoking Weed Can Do To Your Relationship