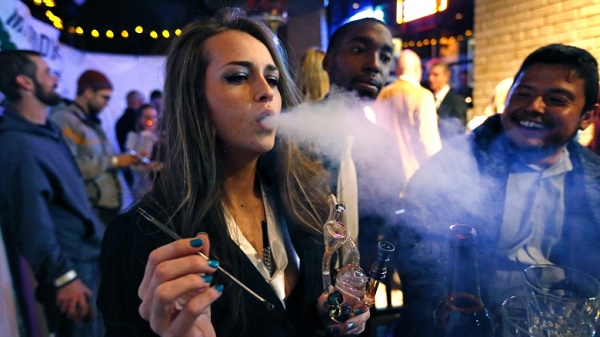 As marijuana advocates in Canada take part in 4/20 cannabis culture demonstrations today, they know pot-smoking events in the not-too-distant future could actually be legal.

But when the Liberal government makes good on its campaign promise to legalize marijuana, there are bound to be many questions about life in a pot-permissive Canada that are more about social norms than laws. In the U.S., Colorado, Washington, Oregon and Alaska have already lifted prohibitions on recreational weed, leaving American etiquette experts with a new frontier to address.

“I think where it goes wrong is when people just assume that because it’s legal they can do it anywhere, anytime and it doesn’t matter,” she said. “All the rules of good etiquette still apply.”

Marijuana at work? Probably not.

Companies should develop policies around marijuana use as soon as legalization looks like it will move forward, Post said.

Most businesses don’t allow drinking on the job — and employees should treat legalized pot the same way, she said.

Even though smokers might take cigarette breaks at work, smoking marijuana is not the same thing.

However, if marijuana becomes legal, she said, it’s possible that colleagues might start using pot together at the end of the day, just as they would go for after-work drinks.

As people start to navigate the new social reality of open marijuana use, Post said, the etiquette around bringing pot to parties has many similarities to alcohol consumption.

For example, a bottle of wine is usually considered a great host or hostess gift, she said, but not if the host doesn’t drink wine — or doesn’t drink at all.

Similarly, if marijuana is legalized, “bringing over some nice weed as a hostess gift is totally going to be appropriate,” Post said, but only if the person holding the party is actually into pot.

And don’t start smoking pot at a friend’s party just because it’s legal, she said.

It’s never appropriate for a guest to “redirect a party that you’re attending without first asking the host” in any way, Post said.

“You don’t just bust out Twister and board games and stuff like that as a guest,” she said. “Your host gets to choose.”

Pot on a first date?

Some people have a drink to feel more relaxed or at ease before going out on first date, Post said, and they might use marijuana for the same reason.

But if a date shows up stoned, she said, it raises questions and could hurt the other person’s feelings.

“I think you kind of wind up wondering,” she said. “Was it that hard … to come out on a date with me that you had to be high for it?”

Or you’d wonder whether the person is high all the time, Post said.

Again, what’s socially appropriate with legal pot would be similar to what’s acceptable with alcohol.

“If someone showed up drunk on your date, you’d be like, ‘Oh boy. Okay, that’s not the night I was expecting.'”

Even if it’s legal, smoking marijuana not always OK

In a speech to a special session of the UN General Assembly on Wednesday, Health Minister Jane Philpott said legislation to legalize marijuana in Canada would be introduced in spring 2017.

Liberal MP Bill Blair, a former Toronto police chief, is leading a task forcethat’s expected to tackle some of the thornier questions around legalization. Blair cautioned in February that until new legislation and regulations are in place, “the current laws remain in force and should be obeyed.”

“When you’re responsible for other people, when you are responsible for work, those are times we tend to not want to have an altered state of mind,” she said. Just as it probably wouldn’t be acceptable to drink at your child’s soccer game, nor would using pot.

Not everyone welcomes legalized pot

“It’s important to recognize that not everybody shares the ‘yay, legalized weed’ mentality,” Post said.  “Just like alcohol, [for] people who have had really bad experiences with it, it is a bad thing to them.”

For example, that person you’re going on a date with may have gone through seeing a loved one addicted to the drug, she said.

The key is to be respectful of other opinions, whatever your personal feelings are about legalized pot, Post said.

“We try really hard to live in a society where when something is legal, that we don’t judge other people for choosing to make it a part of their lives,” she said.

And on the other side, people who don’t want to use marijuana should never feel pressured to do so.

“Just because it’s legal doesn’t mean that you have to let people do it in your home,” Post said. “It’s really up to you how much you let it into your life.”

Source: Pot etiquette: How to behave when marijuana is legalized in Canada – Canada – CBC News