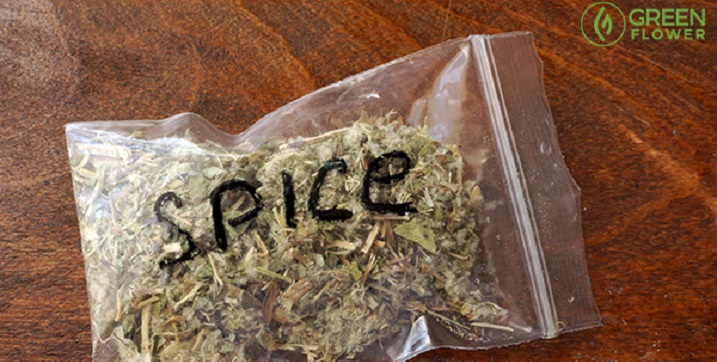 Is it hard to believe people are still consuming fake marijuana? In this post from Green Flower learn about the top seven unbelievable risks of synthetic marijuana.

Sometimes sold for a measly $3 a packet, synthetic marijuana may seem like a cheap substitute for those craving a cannabis experience.

However, the term “synthetic marijuana” is a falsehood.

While the green leafy material is sprayed with ambiguous chemicals and may look similar to cannabis, the products are anything but. In fact, many of the effects of synthetic marijuana are nothing like those of the real plant.

From severe sedation to noticeable agitation, synthetic cannabis can produce extreme and varying effects on the human body.

Developed by coating bulk plant material with man-made molecules designed to activate the same cell receptor sites as the cannabis plant, it is difficult to tell exactly from what synthetic marijuana is made without lab testing.

Often marketed as “incense”, “potpourri”, “spice”, and “herbal blends” that are “not for human consumption”,  several molecules found in synthetic cannabis have been made illegal due to their hazardous health effects.

However, suppliers weezel around the law by slightly altering the chemical structure of the substances used to provide the “high” the synthetics create.

As a result, these mysterious chemical mixtures can still be quasi-legally sold over the internet and in some smoke shops and gas stations.

To clarify, synthetic “marijuana” sold as a recreational product is different from the synthetic cannabinoid medicines used by doctors to treat real conditions.

For example, the anti-nausea medicine, Marinol, is technically a synthetic cannabinoid. However, this medicine has been studied in large-scale clinical trials and is approved as a safe-to-use medicine.

In contrast, no trials or safety studies have ever been conducted on the compounds used to make Spice.

So, what makes synthetic marijuana so darn bad?

As it turns out, the mystery molecules can wreak absolute havoc on the body and may even be fatal.

When it comes to spice, the science really says it all.

Here are the top seven unbelievable risks of synthetic cannabis:

Yes, fatal overdoses from synthetic cannabinoid products have been recorded.

According to the U.S. Centers for Disease Control, hospitalizations and poisonings caused by synthetic marijuana increased significantly between 2010 and 2015.

Of the 456 incidents reported during that time, there were 21 deaths. Three deaths were caused by synthetic cannabis alone. 18 deaths included synthetic marijuana and possibly other substances.

The CDC also stated that around 24 percent of spice consumers were between the ages of 13 and 18, a scary thought considering that the synthetics can have deadly consequences.

But, why are synthetics so dangerous?

That means that they are better able to “grab on” to cell receptors better than the primary psychoactive in natural cannabis, tetrahydrocannabinol (THC).

In addition, the CDC explains that synthetics can have “effects two to 100 times more potent than Δ9-tetrahydrocannabinol (the principal psychoactive constituent of cannabis), cannabinoid receptor binding, and genotoxicity.”

Simply stated, depending on the molecule used in the synthetic, spice may not only be more potent but may also affect parts of the body that traditional THC does not.

One of the potential side effects of synthetic cannabis? Life-threatening stroke.

“The warning follows their treatment of a 25-year-old prison inmate who had no family history of heart disease or traditional cardiovascular risk factors, and who was left with a permanent disability,” authors begin in a press release regarding a piece published in BMJ Case Studies.

“He was brought to emergency care in a state of severe confusion, with weakness on the right side of his body and double incontinence.”

As it turns out, the inmate had used a synthetic marijuana product and had bad reactions to the plant. The inmate had experienced a stroke and previous heart attack, which now require him to utilize medical treatment for the rest of his life.

It is unclear how many types of synthetic cannabinoids may cause a stroke or what amount. However, as the case study suggests, the risk is there.

Synthetic cannabis has been linked to both rapid heartbeat and extremely slow heartbeat, indicating that it can have some severe effects on the cardiovascular system.

These severe effects came to light in a 2011 case study published in Pediatrics.

The case report presented a 16-year-old boy who suffered a series of heart attacks after smoking a synthetic product marketed as K2.

Like stroke, any heart attack has the potential to be fatal and can cause life-long disability.

The teen, in this case, was one of three teenagers admitted to Texas hospitals complaining of chest pain that persisted for several days.

All teens tested with elevated levels of troponin, a protein that is released in excess during a heart attack.

Normally, levels of cardiac troponin levels are so low that they are very difficult to detect.

In fact, according to the reference ranges used in the study, levels of cardiac troponin in the blood should test under 0.4 nanograms per milliliter.

However, in the presented case study, one patient presented with a whopping 25 nanograms of troponin per milliliter, indicating that he was having a significant heart attack.

In yet another case study published in the Permanente Journal back in 2017, a young man was presented to the hospital with symptoms of kidney failure after consuming a synthetic marijuana product.

The man was in such poor condition that he had to be intubated for seven days.

Intubation is an emergency procedure used by medical professionals when a patient is unconscious and is incapable of breathing on their own.

The procedure requires doctors to insert a tube down the throat.

As the man’s kidneys began to shut down, he lost the ability to breathe without medical intervention by the third day in the hospital.

In total, he was in the hospital for 10 full days in recovery from renal failure caused by K2 synthetic marijuana.

A review published in the Neurohospitalist presented two case reports of consumers who went into a seizure after consuming some synthetic herbal “potpourri.”

The first case was a 24-year-old male who was presented after experiencing a three to five-minute-long seizure.

Afterword, the patient remained in a postictal state for some time, which is a state of drowsiness, confusion, and altered consciousness that sometimes follows a seizure.

The second case was a 36-year-old female who also seized for several minutes.

Her seizures only stopped after doctors treated her with six different anti-convulsant drugs in very rapid succession.

After being intubated for 12 hours, she told her doctors that she had smoked a synthetic marijuana product called Black Mamba Spice shortly before seizing.

The effects of plain ol’ natural cannabis could not be more different.

“Spice can cause psychosis, tachyarrhythmia [rapid heart rate], and seizure, which are not typically seen after marijuana (Cannabis sativa) use,” write the authors.

When it comes to messing with the endocannabinoid system, it’s important to use caution.

The endocannabinoid system is the vast neurotransmitter network that allows consumers to experience the medicinal and euphoric effects of cannabis.

However, this neurotransmitter network is also wide-reaching. It affects everything from heart rate to sleep, to motor control to mood, and to memory and learning.

It is partly because of the far-reaching effects of this system that make synthetic cannabinoids so dangerous.

In a 2015 case study published in the Journal of Community Hospital, Internal Medicine Perspectives presents a case of a 45-year-old man who went into multi-system organ failure after consuming K2 Spice.

The toxic shock caused by the fake cannabis products caused bleeding between the brain and the organ’s membrane covering.

The shock was so severe that he also presented with rapid muscle deterioration, heart attack, and metabolic dysfunction.

While all of these side effects have been associated with K2 in the past, the authors were shocked to find that these symptoms all presented in one single individual after consuming the synthetic herbal blend.

There has yet to be one single reported death from real cannabis.

As mentioned above, the same cannot be said for synthetics, which have been responsible for hundreds of hospitalizations and a growing number of deaths.

In fact, as CNN reports, in April of 2018, at least 56 people were hospitalized in the Chicago area due to severe bleeding caused by synthetic cannabis laced with rat poison.

A statement from the Illinois Department of Public Health broke the news that synthetics caused consumers to cough up blood, urinating blood, and induced bloody nose and bleeding gums.

This internal bleeding caused two deaths in the state.

Hopefully, dangerous products like Spice and K2 will soon be a thing of the past, and we can focus on the real cannabis, how it works, how to get the most benefits, and so much more…