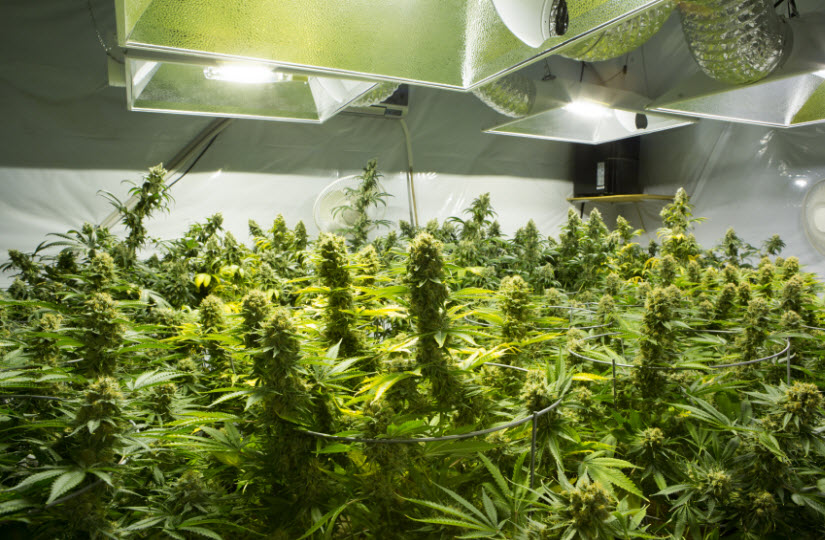 This post from Medical Marijuana Inc dispels the 9 most pernicious myths surrounding cannabis, the world’s most controversial plant.

What you think you know about cannabis might be hurting you. Here is a look at a few of the most pernicious myths surrounding the world’s most controversial plant.

Cannabis is a “gateway drug.”

FALSE: A recent study in the Journal of Law and Economics found that marijuana acts not as a “gateway drug,” but instead as a less harmful replacement for alcohol, with drunk driving fatalities dropping up to 11% in medical marijuana states.

According to a study published in the October 2014 issue of JAMA Internal Medicine, deaths from opiate drug overdoses were 25% lower in states that had legalized medical marijuana.

The Centers for Disease Control and Prevention recently reported that more Americans now die from painkillers than from heroin and cocaine combined, and drug overdose deaths have more than tripled since 1990. They have never been higher in American history.

TRUE: One can become dependent on sugar, gambling, reckless driving, or even on another person. It is possible to become psychologically and/or chemically dependent on many substances – including cannabis (more specifically, THC) – but some substances pose greater risks than others. The risk of chemical dependence on opiates, for example, is far greater than the risk of chemical dependence on cannabis — with far deadlier consequences as a result.

THC creates changes in the brain. That fact is not in dispute. Cells in the brain have an abundance of receptors for endocannabinoids (the cannabinoids our bodies make) like anandamide, a neurotransmitter that affects the “reward” response in the brain, as well as motivation and pleasure responses. THC resembles the shape of anandamide, and so THC will “dock” at the same receptor sites and interfere with the natural responses in the brain. The extent to which THC creates permanent changes in the brain and in the “reward” responses is not well established, but research has indicated that (in adults) these changes are mild – even with prolonged use of cannabis.

About 9% of all cannabis users meet the criteria for cannabis dependence (with around 1.1% of all cannabis users entering treatment). That rate has been constant over the last decade, despite a dramatic increase in states that have passed cannabis laws of some kind. Dependence rates among cannabis and other substances reflect a significant gap, with 32% of tobacco users and 15% of those who consume alcohol.

The Diagnostic and Statistical Manual of Mental Disorders, Fifth Edition (DSM-5) is the American Psychiatric Association‘s (APA) classification and diagnostic tool. This latest edition (released in 2013) does something very interesting and somewhat controversial: it categorizes substance use disorders more on a sliding scale, depending on the severity of each patient’s symptoms. The DSM-5 removed “cannabis dependence” and replaced it with “cannabis use disorder,” and defined several different “sub-diagnoses” within the “disorder.”

If you or someone you love talks about not being able to “make it through the day” without cannabis – or any substance – please contact a counselor or other qualified mental health professional.

You can have a fatal overdose on cannabis.

FALSE: DEA Administrative Law Judge Francis L. Young had this to say about the safety of cannabis in 1988:

“In practical terms, marijuana cannot induce a lethal response as a result of drug-related toxicity.”

“At present it is estimated that marijuana’s LD-50 is around 1:20,000 or 1:40,000. In layman terms this means that in order to induce death a marijuana smoker would have to consume 20,000 to 40,000 times as much marijuana as is contained in one marijuana cigarette.

“The therapeutic ratio for prescribed drugs is commonly around 1:10 or lower. Valium, a commonly used prescriptive drug, may cause very serious biological damage if patients use ten times the recommended (therapeutic) dose.”

According to the CDC, here are the the Immediately Dangerous to Life or Health Concentrations (IDLH) for both alcohol and cannabis:

Alcohol: 3,300 ppm
Marijuana/THC: Not listed
Cannabis is, by far, the least harmful recreational drug. It is at least 114 times safer than alcohol, according to a study published in the January 2015 issue of Scientific Reports (a subsidiary publication of Nature).

Even WebMD has weighed in on the topic:

“Although the use of [marijuana] is not harmless, the current knowledge base does not support the assertion that it has any notable adverse public health impact in relation to mortality,” [Dr. Stephen] Sidney concludes.” [Stephen Sidney, MD is the Director of Research Clinics and a senior research scientist with the Kaiser Permanente Northern California Division of Research]

And finally, here is a related graph on the harm index of various drugs from the November 2010 issue of The Economist, first published in respected medical journal, The Lancet: 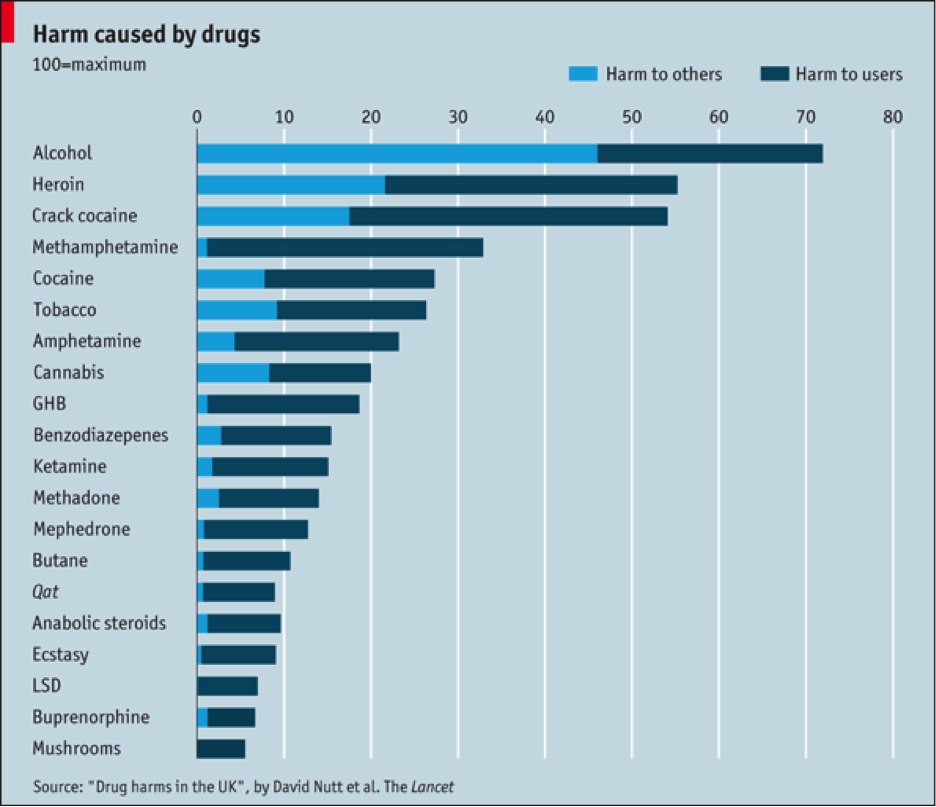 Crime rates will go up with cannabis legalization.

FALSE: The first state to legalize recreational cannabis (Colorado – January 2014) saw a decrease in violent crime through November 2014 in its capital city (Denver); Denver also enjoyed a decrease in traffic fatalities, burglaries, and other property crimes in the same period.

The legalization of medical cannabis doesn’t result in increased crime, either. Over a sixteen-year period, researchers at the University of Texas-Dallas studied crime rates and medical marijuana laws. When they published their findings in 2014 in the journal PLoS ONE, they announced that none of the seven different crime types measured increased along with medical marijuana legalization. (Homicide, rape, robbery, assault, burglary, larceny and auto theft.) Full text of this ground-breaking study may be found here.

States that have liberalized marijuana laws enjoy healthier outcomes for children and teenagers, like reduced rates of prescription drug overdoses and lower school dropout rates, according to a study by the Center on Juvenile and Criminal Justice.

In addition, 76% of Americans believe that even if marijuana were not legalized, people possessing small amounts should not face jail time according to the Pew Research Center.

Most doctors wouldn’t recommend medical marijuana for their patients.

FALSE: In a 2013 poll conducted by The New England Journal of Medicine, 76% of physicians polled were in favor of the use of marijuana for medicinal purposes. The doctors surveyed came from 72 countries and 56 states/provinces or territories in North America.

Another poll from April 2014 by WebMD revealed that 67% of physicians surveyed said that medical marijuana should be a treatment option for patients.

Hemp is not cannabis.

FALSE: Hemp is just another name for Cannabis sativa that is grown for agricultural (for food, fiber, oil, and seed) purposes. Commonly, the term “hemp” is used to describe Cannabis that has less than 0.3% THC in its flowers; meaning, barely any THC at all and certainly not enough for recreational drug purposes.

CBD is a controlled substance and is illegal.

TRUE/FALSE: CBD, when found in marijuana (a Schedule I drug) is illegal – but only by association. Like an “accessory after the fact.”

In order to list a substance on the Controlled Substances Act (CSA) Drug Schedule (the federal listing of illegal drugs and the severity of their illegality), the Drug Enforcement Agency (DEA) must follow certain procedures as outlined within the CSA.

A search of the Federal Register does not show any proposed rule or final action classifying cannabidiol in any drug schedule.

The only effective cannabinoids come from marijuana – not hemp.

FALSE: Here’s the Botany 101 explanation. Both hemp and marijuana are part of the Cannabis plant genus, and thus both contain the same major cannabinoids (CBD and THC) – only in different amounts. Marijuana plants have been bred over time to have higher levels of THC; higher levels of THC mean lower levels of CBD. Hemp is the opposite; it has very little THC and much more CBD.

CBD and THC molecules in any Cannabis plant are the same and are identified via the same methods, regardless of which subtype of Cannabis they come from. To insinuate otherwise is to deny basic chemistry and to render all cannabinoid testing irrelevant.

Now that there’s CBD, there’s no need for THC.

FALSE: Preserving the entire spectrum of plant compounds seems to have a synergistic benefit that isn’t seen from isolated cannabinoids in laboratory settings. While more research is undoubtedly needed, a February 2015 study published in the journal Pharmacology & Pharmacy indicates that synthetic, isolated cannabinoids (in this case, CBD) have limited clinical efficacy for basic inflammatory conditions. [PDF]

via The Top 9 Cannabis Myths – MJNA.