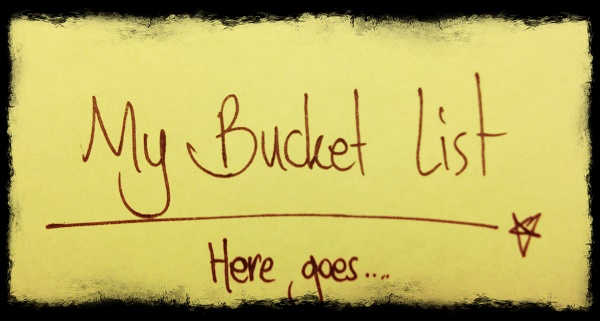 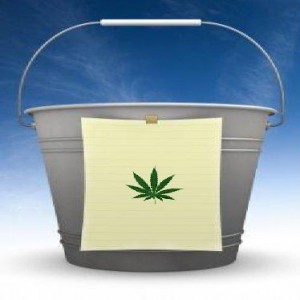 Do you have a ‘bucket list’ for marijuana? For those that aren’t familiar with a bucket list, it’s a list that a person makes of things that the would like to do/experience before they ‘kick the bucket.’ I have a marijuana bucket list, and have since before I co-created this blog with Jay Smoker back in 2010. I think that every cannabis consumer should have a bucket list dedicated to cannabis. If you don’t already have one, there’s nothing wrong with starting one today!

This isn’t the first time that I have written about this topic. Looking back at old articles, it always makes me smile when I read about something that used to be on the list, but has since been crossed off. One of those items that comes to mind is seeing cannabis legalization become a reality in Oregon. The 2014 Election obviously took care of that. There were also other items sort of piggybacking off of that one, like making a legal purchase at a regulated store. I’m happy to say that I’ve done that several times since limited recreational sales began in Oregon 🙂

I asked on Facebook if any others have a marijuana bucket list, and if so, what was on it. It seemed like the two most common answers revolved around people seeing marijuana legalized in one form or another in their area, and things related to cannabis cultivation. There’s an item that has been on my bucket list for a very long time now, and I’m very excited to say that I’ll be able to mark it off in one week. I have a Chong Bong that I have always wanted to get autographed by Tommy Chong. The Oregon Marijuana Business Conference is taking place in Eugene on April 24th, and Chong will be there, and I’m told that I will get to meet him and get my bong signed. So I will keep that item off of my list for now. Below are the items that are currently on my list. They are in no particular order, other than number 1. Number 1 is definitely at the top of my chart these days:

I first met Amber Senter a little after starting this blog, but it wasn’t in person. She was a contributor to a cannabis website at the time, and an activist, and we became internet friends over time. I have always wanted to meet her in person, but it always seems like we miss the opportunity for one reason or another. She has an amazing passion for all things cannabis, she has a ton of talent, and us having a session together is way overdue!

Speak at a cannabis event

There’s more to this one than just simply being asked to speak at a cannabis event. I have been asked before, but I was never able to. One big factor for a long time was that I didn’t want to get fired from my job, as my employer frowned upon cannabis consumption, even during off-work hours. That all changed with the legalization of cannabis in Oregon, so that’s no longer an issue. However, it’s still very hard to get to cannabis events, considering that most of them seem to be on weekdays. I dream of a day when all of the ‘moons align’ and I get asked to speak at an event and can actually do it. What would I talk about? Who knows, I guess we will just have to wait and see!

This item used to be ‘see marijuana prohibition end in Oregon.’ I was fortunately able to scratch that off my list, so I have replaced it with a more ambitious item. It’s tough to say exactly when federal prohibition will end, but it’s definitely inevitable. The federal government needs to completely de-schedule marijuana, not re-schedule marijuana, and in the process end federal prohibition. Congressman Earl Blumenauer thinks that will happen within 5 years. I sure hope so.

Get high on hot air balloon

This one has been on my bucket list for a long time. I don’t know why I find it so appealing, but I definitely do. If anyone out there owns a hot air balloon and wants to have a session let me know. I’ll bring the cannabis!

Consume with my grandma

I love my Grams with all of my heart. She used to consume cannabis, but hasn’t in decades. I’ve been trying to get her to re-enter the cannabis lifestyle for a while now. She’s definitely becoming more and more open to the idea, especially CBD-rich topicals. I feel like this bucket list item could be completed soon, or at least hope so.

I grew cannabis for a number of years. Nothing to hardcore, especially compared to what people are doing these days. But I always found cultivating cannabis to be very rewarding, and I want to get a garden going again. But not just any garden. I want to create what I call ‘No Consider Farms,’ the founding principle of which is to give all of the harvest away, minus some personal sampling. I want to link up with people/orgs that have a great need for cannabis and cannabis products, but don’t have the means/knowledge for cultivation. There will be some start up costs, and the space I have is not quite ready, but I hope to have this going by the end of the year.

Whenever I meet someone that has a decent sized bank account, or knows those that do, I always try to plant the seed in their brain to open a cannabis coin-0p arcade. Barcades are popping up all over the place, and I don’t see why a cannabis one wouldn’t do just as well, if not better. Any arcade would do, but I would really like to see a retro one. Places like Dave and Busters, which are billed as ‘Chuck E Cheese for adults,’ have games that are too new for my taste. I want lots of pinball machines, and games from the 80’s and 90’s. I want to see a ‘claw machine’ that picks up cannabis and cannabis products, and I want to see machines like Skee-Ball produce tickets that can be exchanged at the arcade store for pipes, papers, etc.. If you need more ideas about how to create the ultimate cannabis friendly coin-op arcade with a retro feel, let me know. I have ideas galore.

Travel to Amsterdam and other international cannabis destinations

Amsterdam doesn’t have the same appeal that it once did for me, considering that cannabis is legal in Oregon now. But I still want to go there, and other cannabis friendly places. I hate to travel, but I love making new friends that share a love for cannabis.

No more cannabis testing in sports

I truly want to see cannabis drug testing ended everywhere for everyone, but I’ll start with cannabis testing in sports. If you read this blog often, then you know that I’ve been on a sports kick lately, and that’s because I feel that cannabis reform in sports would dramatically increase the momentum for cannabis reform in society as a whole. I’m not exactly sure what it would take at this point to nix marijuana testing in sports, although it’s worth noting that the National Hockey League (NHL) does not include marijuana on it’s banned substance list. But marijuana testing in all other major sports is mandated, even though it shouldn’t be. I think that marijuana testing reform is achievable in professional sports, and if it can be done, I think that it would be HUGE for marijuana reform efforts outside of sports.

Sit in on an ArcView pitch

To be clear, I just want to sit in on an ArcView pitch, not be the person making the pitch. Maybe someday that will change, but for now I’d like to just be a quite person sitting in the back of the room watching what a pitch looks like. I was hanging out with Troy Dayton on Friday, and I explained to him that I don’t even know what a pitch deck is. Like, what does it look like? Is there a standard ‘format’ for one? Does it fit in a folder? Can it be electronic? I’m not sure how all of that works out, but I’d love to be a fly on the wall during one of those things.

Source: Do You Have A Marijuana Bucket List, And If So, What Is On It? | The Weed Blog