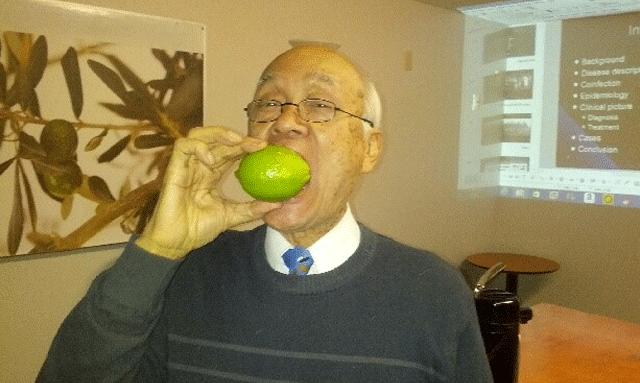 Dr. Ernie Murakami, who’s been treating Lyme disease patients for 20 years, believes that he has found a potential cure for the disease in CBD paste. This post from Medical Jane turns the spot light on the positive evidence of Dr. Murakami’s research on cannabidiol paste as a cure for Lyme disease.

According to the CDC, Lyme disease is the fastest growing vector-borne infectious disease in the United States. The CDC treatment protocol calls for a 30-day treatment plan of oral antibiotics, despite no evidence that this method will cure the disease. In fact, according to ilads.org, a leader in Lyme disease education, 40% of treatment courses have resulted in upwards of a 40% relapse rate, especially if treatment is delayed. Fewer than 50% of patients with Lyme disease ever recall a tick bite or rash, yet, without either, the CDC does not recommend any treatment.

Dr. Ernie Murakami, an 84-year-old activist, believes that he has found a potential cure for Lyme disease and many other illnesses with non-psychotropic cannabidiol (CBD) paste.

Dr. Murakami is the founder of and a teacher at the naturopathic facility, Dr. E Murakami Centre for Lyme Research in Canada. His first Lyme patient came to him 20 years ago in his hometown of Hope, British Columbia. His success in treating this patient and the next resulted in continuing referrals and he quickly established a reputation for having exceptional skill when it comes to the treatment of Lyme.

Over the past 20 years, Dr. Murakami developed two revolutionary techniques for removing a tick from the host. The first, called the Blister Method, involves numbing the jaw of the tick, and is widely used in medical offices and by emergency physicians. The second method is the Drinking Straw and Single Knot Method, which involves trapping the tick with a straw and tying a knot around the mouth of the tick. Constant alternating pressure is then applied until the tick releases its mouth intact.

Murakami’s long-term experience working with Lyme disease has given him ample opportunity to understand the controversy. One faction contends that the disease can be cured within a few weeks with oral antibiotics, such as doxycycline, despite that this method has already been disproven. The other side argues that long-term treatment is necessary to eradicate the cystic form of the disease.

“I once had a patient who suffered from severe depression — the medical community said she was a mental case, but I insisted on doing the tests and we found that her symptoms were the result of Lyme disease (which is contracted through the implantation of a tick),” he [Dr. Murakami] said. “The leading cause of death in Lyme disease is suicide — the depression is that bad.”

Dr. Murakami’s patients regularly reported smoking cannabis when standard medications failed to treat their severe symptoms of pain, fatigue, and multi-organ failure. The doctor doesn’t believe in smoking a medicine, but he was intrigued by the mental and physical benefits of non-psychotropic cannabidiol.

During a hockey accident playing with his grandson, Dr. Marukami hit his head on a basement beam and suffered a skull fracture. The doctor discovered, on the X-ray, a ten-centimeter asymptomatic tumor. He began his research into cannabidiol as a treatment and was amazed at the evidence of tumor shrinkage he came across. In his own words:

“Other anecdotal cases of cannabidiol treating chronic infections resistant to the standard antibiotics convinced me that there was an antibiotic effect with cannabidiol….”

Since the incident, Marukami began to research cannabidiol on live spirochetes with positive evidence. He presented his findings in Fernie, B.C. in October 2014, which has lead to further research, which is currently being conducted at USA University.

May is Lyme disease awareness month. In an effort to raise awareness, a movement has started encouraging people to “Take a Bite Out of Lyme” by sharing a photo of themselves taking a bite out of a lime fruit and sharing a fact about Lyme disease on social media. If you or anyone else you know is concerned about the possibility of suffering from Lyme disease, Dr. Marukami will speak with patients free of charge in his precious spare time.