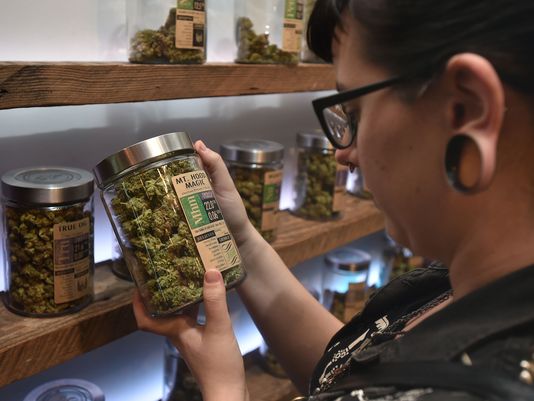 Eleven states that will likely be the last ones to legalize marijuana have been identified by 24/7 Wall St. This post from USA Today analyzes the states with harshest marijuana laws.

Starting with California in 1996, medicinal marijuana use is now legal in 23 states. Of the states with laws protecting medicinal users, four have legalized recreational pot use as well. Despite evolving opinions among voters and legislators, some states still seem unlikely to pass any kind of meaningful reform in the near future. Based on a review of marijuana laws and penalties for possession, 24/7 Wall St. identified the 11 least likely states to legalize marijuana.

According to Mason Tvert, director of communications with the Marijuana Policy Project (MPP), legal repercussions are not the only factor explaining the relatively low marijuana usage in these states. “There is little doubt marijuana prohibition laws are deterring many adults from choosing to use marijuana,” Tvert said. However, a range of cultural factors, from historical immigration patterns to how religious a population is, also come into play, he noted.

All of the states least likely to legalize pot tend towards the conservative end of the political spectrum. In the 2012 presidential election, all of the states on this list voted for the conservative candidate. Tvert explained that each state’s history feeds into and partially explains its current culture and attitude. For example, though federal alcohol prohibition ended in 1933 with the 21st amendment, Oklahoma did not repeal prohibition laws until 1959, more than a quarter of a century later. Since marijuana has been illegal for the entirety of most people’s lives, “it makes them hesitant to make significant changes to marijuana policies,” Tvert said.

While marijuana policy is largely a social issue, it is also an economic one. Extrapolating from tax dollars already collected from the legally regulated marijuana sales in Colorado, the Anderson Economic Group (AEG) estimates that national excise tax revenue could be as high $3.1 billion with prohibition repeal. While nationwide legalization would certainly provide a lucrative stream of new tax revenue, it could also cannibalize major existing industries. According to the same report by AEG, a nationwide repeal of marijuana prohibition could result in a $221.4 million annual decrease in alcohol sales.

As more states decriminalize and legalize marijuana, federal law is more likely to change. Tvert said, “with social issues like this we tend to see an evolution take place, we tend to see dominoes fall and the pace will continue to pick up.” In other words, national marijuana law reform will become increasingly more likely as more states join legalize recreational pot and join the ranks of Alaska, Colorado, Oregon and Washington.

To identify the last states that will legalize marijuana, 24/7 Wall St. reviewed states with the harshest marijuana laws. We only considered states where medical marijuana, with the exception of cannabis oil to treat epilepsy, is not permitted. Felony charges also needed to be possible for merely possessing the plant under certain circumstances in these states. Since marijuana law reform could be imminent even in the states with the harshest laws, we also excluded states where voter initiatives are scheduled for the near future as well as states where pro-marijuana legislation has gained support in recent months. Marijuana-related arrests per 100,000 residents through 2012 in each state came from the FBI’s Uniform Crime Report. In addition, we considered the estimated proportion of residents 12 years and older who reported using marijuana some time in the past year based on annualized data from 2012 and 2013, from the Substance Abuse and Mental Health Services Administration. The Marijuana Policy Project provided public opinion polls based on the most recent available survey. All data on current enforcement policies and penalties were provided by NORML.

These are the last states that will legalize marijuana.

Marijuana use among Alabama residents is relatively rare. Roughly 9.7% of residents 12 years and older report using the drug, one of the lowest usage rates among all states and significantly lower than the national usage rate of 12.3%. Low useage may be the result of steep legal penalties for possession. Even after a reduction in the severity of the penalties earlier this year, second time offenders caught with any amount of marijuana face felony charges and up to five years incarceration.

Not all marijuana legislation introduced to the state legislature this year was signed into law. The senate killed a bill that would have established a medicinal marijuana program. With harsh possession penalties, low usage rates, and a demonstrable lack of political support, Alabama is among the least likely states to legalize marijuana in the near future.

Arkansas has a voter initiative process, and as Tvert explained, this could put progressive marijuana reform on the table in the near future. However, the state is still an unlikely place for full legalization. In 2012, voters in Arkansas did not pass a measure that would have allowed seriously ill residents to use medicinal marijuana without fear of legal repercussion. Two years later, after falling short by about 11,500 signatures of the 62,507 required, a proposal to legalize recreational use of the drug failed to even make it on the ballot. having a A reluctance to legalize marijuana in Arkansas may not be especially surprising as nearly half of all counties in the state ban alcohol sales.

Possession of four ounces or more in Arkansas is a felony punishable by up to six years in prison and a $10,000 fine. Second time offenders in Arkansas will face felony charges for possession of as little as a single ounce. Prosecuting and arresting marijuana offenders is a strain on state resources. There were 5,324 arrests in 2012 for marijuana possession alone. According to the MPP, 91% of burglaries in the state and more than 90% of all motor vehicle thefts went unsolved in the same year, an indication resources allocated to crimes relating to marijuana may be better used elsewhere.

Despite recent legalization of non-psychoactive cannabis oil for medicinal purposes, marijuana legalization seems unlikely in the near future for residents of the Peach State. Even those who are prescribed cannabis oil for specific medical treatment face potential legal risks. Georgia currently does not allow for the production or distribution of the medicinal oil in the state, leaving patients little choice but to travel across state lines to obtain the medicine, a direct violation of federal law. While laws regarding the drug’s medical use will remain strict, some legislators along with the majority of voters, support allowing cannabidiol to be produced and distributed within state borders.

An adult in Georgia caught in possession of more than 1 ounce of marijuana can face felony charges, a $5,000 fine, and a minimum of one year incarceration. Marijuana arrests are more common in Georgia than they are in most other states. There are roughly 309 marijuana-related arrests for every 100,000 state residents, significantly more than the corresponding national rate of 239 arrests for every 100,000 people.

MORE:See the rest of the top 11 states least likely to legalize marijuana